Mounts Martha and Eliza are two of three prominent rises, mainly granitic, that protrude to the western coastline of the Mornington Peninsula. The third is Arthurs Seat, which is the highest.

Mount Eliza did not attract European settlement early in the pastoral occupation of the peninsula. It was good mainly for timber cutting. Its prominence, however, did result in the first form of local government being named the Mount Eliza road district (1861), which extended to Mornington and Hastings.

Some settlers gave names to places near Mount Eliza: three Canadian sawmillers (Canadian Bay), and James Davey (1854, Daveys Bay). In 1865 the local Anglican community constructed the St James the Less church, a heritage listed building made from local granite. The next decade was when well-to-do Melburnites constructed large holiday homes along the coast. Early surviving examples in Mount Eliza are Sunnyside (now Morning Star), built in 1870, Trawalla (1871) and Manyung (1860s). The latter was renamed Norman Lodge when acquired by Norman Myer and used as a staff holiday centre for the Myer Emporium in the 1940s-50s. A later example was Moondah (1888), confusingly renamed Manyung when converted to a hotel by the Ansett travel company, and subsequently made the home of the Australian Administrative Staff College (1957).

Until the 1920s there were few permanent residents at Mount Eliza. Electrification of the train service to Frankston (1922) and the wider availability of motor cars brought Mount Eliza in closer touch with Melbourne. The northern foothill of Mount Eliza, known as Olivers Hill, was brought under house-building. A girls' school, Toorak College, moved to Mount Eliza in 1928.

There had been intermittent schools at Mount Eliza since 1871, but the first continuous school was in 1929 when a building was transported from Parkdale for Mount Eliza State primary school.

In 1924 Marion Mahony Griffin and Walter Burley Griffin designed the Ranelagh estate, named after the Ranelagh guest house. Bounded by Canadian Bay Road, Mount Eliza Road, Earimil Creek and the beach, the estate had its own country club (Ranelagh Club 1924) and beach. The Canadian Bay Boat Club (1958) is nearby. A public hall was opened in 1924 and a general store was built in 1928. Holiday homes increased in number, but even by the early 1950s there were only two shops, a cafe and a garage at Mount Eliza.

During the early postwar years some of Melbourne's foremost architects designed houses for Olivers Hill and Mount Eliza. Robin Boyd's Pelican House (1957) for Ken Myer and Roy Ground's Round House (1953) are celebrated examples. The Peninsula Anglican Grammar school was opened in 1961, a sign that sufficient families with the means to pay fees had taken up residence. Mount Eliza high school opened in 1975. A shopping centre grew around the intersection of Canadian Bay Road and Mount Eliza Way, attractively flanked by public reserves with tennis and bowling facilities. Ranelagh estate is positioned between the shops and the beach. St James the Less church is on the Nepean Highway at the far end of the estate, near Earimil Creek which runs through a linear parkland. Mount Eliza's real estate golden mile, however, is near Daveys Bay.

Mount Eliza regional park, formerly a tip, is 3 km south-east of the shops. The summit of Mount Eliza is on Mountain View Road, nearer the shops. A quarry down-slope has become one of two lakes in the park. The beaches are broken by headlands, lending them a degree of exclusiveness. Daveys Bay beach also has a yacht club (1909). Ranelagh, Moondah and Sunnyside beaches are named after the respective nineteenth century mansions; the last two are adjacent to the Staff College and Camp Manyung.

The Staff College (later Mount Eliza Business School) which had begun in 1957, founded by the business community with the single focus of addressing a perceived gap in leadership and management skills throughout Australia, merged in 2004 to become the Mount Eliza Executive Education, part of the University of Melbourne's MBA program. From 1994-2001 the former Staff College had been associated with Monash University.

Mount Eliza has three State primary schools, each with about 650 pupils in 2014, a State secondary college (633 pupils, 2014), Catholic primary (1981) and secondary schools and two private schools. Its median house price in 1998 was $215,000, the highest on the Mornington Peninsula except for Portsea.

Mount Eliza's socio-economic position in its particular part of the Mornington Peninsula was as follows in the 2011 census:

Mount Eliza's census populations have been: 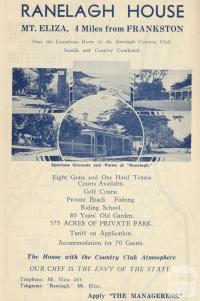 The house with the country club atmosphere, Mt Eliza, 1918