Moyhu is an agricultural village near the King River in north-east Victoria. It is 27 km south of Wangaratta, and 180 km from Melbourne.

Moyhu is positioned where several creeks enter the King River, and the area is subject to flooding. The fertile district was settled by Dr George Mackay who took up the ‘Myrrhee’ pastoral run early in 1838. The run's name is thought to have been derived from an Aboriginal word meaning wind. Myrrhee was probably later corrupted to Moyhu (although there is a Myrrhee village south of Moyhu on a tributary of the King River).

Moyhu was opened up for selection during the late 1860s and a school and Catholic church were opened in 1874 and 1875 respectively. About 10 km south of Moyhu is Edi, where gold was discovered in 1862. Edi continued as a mining settlement which diversified into tobacco and hop growing. Moyhu developed alongside it as an agricultural producer, and gradually overtook it. In 1899 a narrow gauge railway was opened from Wangaratta to Whitfield along the King Valley, which gave Moyhu's dairy products improved access to markets. In 1933 Moyhu had two butter factories, a market, two halls, stores and a hotel.

Moyhu grew to be the largest town in the former Oxley shire. During the 1950s a shire works depot was opened in Moyhu, acknowledging that Moyhu was in the centre of the shire. There was an unrealised prospect of Moyhu becoming the shire's administrative centre, in preference to shire offices in the large provincial centre of Wangaratta which was outside the shire.

The narrow gauge railway closed in 1954, but by then motorised road transport was a readily available substitute. A progress association secured a reliable town water supply in 1963.

Moyhu has a school (32 pupils, 2014), hall, three churches, a general store, a caravan park, recreation facilities and a hotel. One of the two butter factory buildings is east of the village.

Moyhu's census populations have been:

At the 2011 census, agricultural employment was beverage (wine) making (7%) and other farming (13.1%) of all employment. 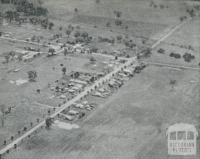