Moyston is a rural village below the eastern foothills of the Grampians National Park, 15 km west of Ararat.

The village originated with the discovery of gold in 1857 and the rich Campbells Reef in 1858. An Anglican school was opened in 1858 and a township was surveyed three years later. During the early 1860s Campbells Reef was renamed Moyston, after Moystown in County Tyronne, Ireland: there were numerous Irish miners from that area.

Bailliere’s Victorian gazetteer (1865) recorded Moyston as having six quartz-crushing and pumping machines, and observed that the surrounding country was well suited for agriculture. There were three hotels, a Presbyterian church (1865) and a court house. By the 1880s mining began to decline and a farming community evolved. There were several orchards and vineyards, as well as the usual pastoral and wheat-growing activities. The last mine closed in 1910. In 1903 Moyston was described in the Australian handbook:

By the 1930s Moyston was an agricultural village, mentioned in contemporary records as a tourist resort, and with an active branch of the Australian Natives Association. (A memorial commemorates the founding of the Moyston branch of the ANA in 1871.) In 1953 Seppelts winery at Great Western named three wines after local place names: Moyston Claret, Chalambar Burgundy (after Mount Chalambar) and Rhymney Chablis (after the Rhymney gold reef). All achieved a level of excellence unusual for everyday wines. The Moyston name continues and Seppelt Moyston Cabernet Sauvignon is only released in exceptional years.

The hotel closed in 1970, but Moyston’s position on the way to the Grampians has maintained a small tourism profile for the village. There is an annual rabbit-skinning championship. The village has a general store, a football ground, an Avenue of Honour, Uniting and Anglican churches, a hall (1914) and a school (26 pupils, 2014). Water is reticulated from a reservoir built in 1973. Relics include numerous old gold workings, mullock heaps and the Catholic church (1879) which has closed. Horatio Wills’ ‘Lexington’ homestead (1851) is near Moyston.

A bushfire around the areas of Moyston, Rocky Point, Willaura North, Maroona and Langi Logan burnt through 5700 hectares and destroyed two houses in Moyston in January 2015.

Moyston’s census populations have been: 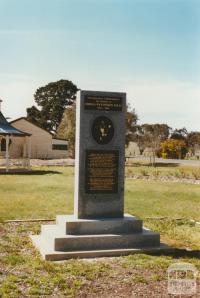 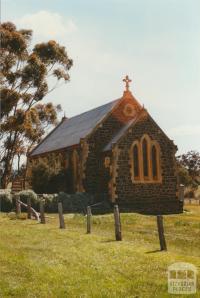