The area was opened up for farm selections in the early 1870s, with a school (named Olga Plains) opening in 1872. The name Mysia was generally adopted later in the decade, as a school named Mysia was opened in 1876, being renamed Borung in 1884. Borung is about 7 km southwards. Mysia was the name of a place in Asia Minor, mentioned in connection with St Paul in Acts 16: 7-8. A Presbyterian church was opened in about 1876 and a mechanics’ institute was opened in 1889. The railway line was extended through Mysia to Boort in 1883.

Although the average rainfall in the district is enough for wheat-sheep farming, prolonged dry spells forced farmers to cart water for stock. The completion of the Waranga-Mallee stock channel in 1928, passing 2 km south of Mysia, relieved water shortages. The school was unusual in that the local community raised money to replace it with an impressive War Memorial building and gates in 1919. Another significant building was a large mud brick and timber general store (1883). Mysia also has a recreation reserve and a cemetery. The school has closed. 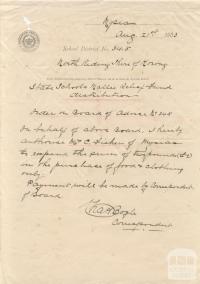