Natte Yallock is a rural locality on the Avoca River where it is crossed by the road between Maryborough and Redbank in central-west Victoria. It was named after the Nettylloc pastoral run (1848), a subdivision of a pastoral run taken up in 1841. It is thought that the name derived from Aboriginal words describing water.

The land at Natte Yallock was not gold-bearing, and it was taken up for farm selections in the early 1860s. The formation of the village arose from it being near a convenient fording place across the Avoca River: there was one, possibly two, hotels near the river crossing by 1862, along with a school built of slabs. Road hauliers used the road through Natte Yallock with the assurance that there would be water and green feed for their animals. A bridge was built in 1864.

A Wesleyan chapel was built in 1868, doubling as a school until a new building replaced the leaky slab structure. There was grazing, saw milling and dairying during the 1870s-80s as the river plain had stands of red gum and seasonal pastures. In 1903 the Australian handbook described Natte Yallock:

The school was a significant community centre, maintaining that role until 1935 when a public hall was built. In addition to the hall and the school (5 pupils, 2014), Natte Yallock has a recreation reserve, a Uniting church (1905) which replaced the Wesleyan Chapel, and an Avenue of Honour planted with pine trees. Pastoral activities – sheep and some meat cattle – are the main industries.

Natte Yallock’s census populations have been: 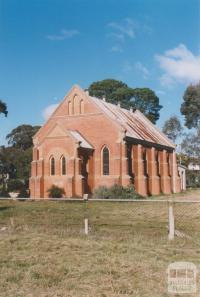