Nerrina is an outer-urban area, 6 km north-east of Ballarat. The name is believed to be derived from an Aboriginal expression, and is an alternate for the original name of the Little Bendigo gold diggings (1851).

In 1858 an Anglican school was opened in Little Bendigo, a small postal hamlet with several quartz crushing machines for the surrounding gold diggings. A Methodist church followed in 1865. In 1878 a government school, of Swiss-Gothic design, replaced the earlier building. Two hotels were recorded in the 1890s in the Victorian municipal directory, which estimated the population to be about 400 people. Nerrina was described in 1903 in the Australian handbook:

As mining declined, the population dwindled. The school had 7 pupils in 1968, but after then Ballarat’s outer-urban growth began to repopulate the district. In 2014 the Little Bendigo school had 86 pupils, and its original building is on the Victorian Heritage Register. The handsome Anglican church (1864) has been sold as a residence, but the Methodist church building moulders in open bushland.

Nerrina’s census populations have been: 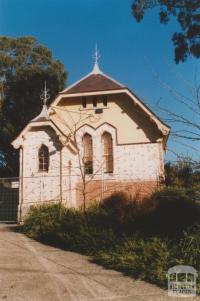 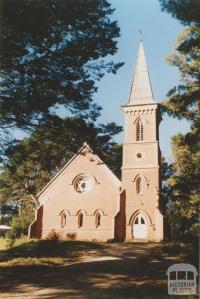