Noojee is a small township nestled in a valley in the Great Dividing Ranges, at the junction of the Latrobe and Loch Rivers. It is about 40 km north of Warragul in West Gippsland. According to Bunce's Language of the Aborigines of the Colony of Victoria (1859), Noojee is an Aboriginal word meaning cease.

Settlers moved into the area in the late 1880s but the steep terrain, dense forest and poor access made progress slow. In 1919, the branch railway line from Warragul was extended to Noojee. The steep descent into the valley incorporated seven high wooden trestle bridges. A township was laid out around the rail terminus. There was soon a store, post office, school and hall.

Vast amounts of timber were railed from Noojee, much of it transported to the station on tramways from the sawmills in the bush. One of the sawmills installed a hydroelectric plant to power its machinery, also supplying Noojee, Neerim and Warragul townships with electric power.

Bushfires are a constant threat and in 1926 a bushfire destroyed most of the town and many mills in the bush. The railway station and some of the railway bridges were also burnt. However, timber was in great demand and the town was soon thriving again. By 1933, Noojee had 249 inhabitants. In the 1930s, the Forests Commission established a Boys' Camp at Noojee to train unemployed youths as apprentices in forestry.

Bushfires almost completely razed the town again in 1939, with over 100 houses being destroyed. The hotel, with its well known dinosaur made of tree ferns, again escaped. The town was again rebuilt and the mills were busy salvaging fire-damaged timber. Gradually, roads were improved and the timber was carted out by truck. The railway line closed in 1954. In 1983 the town was evacuated as the Ash Wednesday bushfires approached, but was saved by a wind change.

There is still a sawmill operating in Noojee, but it is no longer solely a mill town. Nearly half of the houses in the town and district are used as weekenders or holiday homes.

Road access has been greatly improved in recent years and Noojee is a convenient base for camping, bushwalking, horse riding and fishing and for skiing at Mt Baw Baw. Nearby are the impressive Toorongo Falls and the Ada Tree, one of the largest trees in Australia. The only remaining railway trestle bridge has been repaired and is part of a walking track to Noojee.

Noojee's census populations have been: 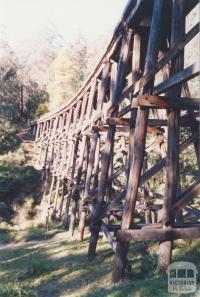