Norlane is a residential suburb immediately north of the Ford motor plant in Geelong. It was named after Norman Lane, a local serviceman from the district who was captured at Singapore and died working on the Burma-Thailand railway line in 1943.

The name appeared in 1947 in the population census, by when the Norlane-North Shore Progress Association had been formed. In that year the Housing Commission began its house-building program in Norlane, beginning with the area bounded by Thompson Road, Cox-St Georges Roads, Station Street and North Shore Road-The Boulevard. By 1976 when its program was completed there were 2464 Commission houses. The peak building period was 1951-57. Much of the housing was for employees at Ford, International Harvester and a phosphate works.

Over 1200 houses were prefabricated units imported from Holland and France. Coincidentally Norlane gathered a large Dutch community, as well as settlers from Britain. The Commission's shopping centre, Labuan Square, was opened in 1954. Areas remote from Labuan Square were serviced by mobile grocery shops in a converted bus until additional Commission shops were built in Alkira, Rose and Robin Avenues. A ‘pram bus’ took mothers to Geelong for more extensive shopping.

Primary schools were opened in 1955 and 1962, and a high school in 1958. The high school was west of the Housing Commission's area, and looked out on wheat fields and the You Yangs. The State primary and secondary schools are now consolidated on the sites of the Norlane West and North Shore primary schools.

There was enormous pressure on housing in the early 1950s, with residents resorting to make-do two-room dwellings, tents and partially completed dwellings. The Housing Commission provided accommodation for families unable to rent or to afford to purchase their own houses.

Norlane has two reserves with ovals and two reserves with mixed facilities adjoining Cowies Creek, its southern boundary. In contrast to neighbouring Bell Park with several churches with Eastern European origins, most of Norlane's churches are of traditional British origin.

There is a Catholic primary school and Isik College (1997) on the site of the former Norlane State primary school. Along Cox Road there is a library, hall and the Waterworld swimming centre. Since Labuan Square, other neighbourhood shops have opened, including Bell Post shopping centre on Norlane's western boundary.

In May 2013 Ford Australia announced that it would close its Geelong factory in October 2016, involving a loss of about 510 jobs.

Norlane's census populations have been:

Aerial view of the Ford Company and wharf facilities on Corio Bay, 1955 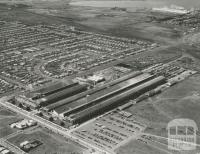