Nullawil is a rural village on the Calder Highway and the railway line to Sea Lake, 25 km north of Wycheproof, north-west Victoria. It is thought that the name was derived from Aboriginal words describing a stick used to kill birds. The name was first applied to the Parish of Nullawil.

In 1891 Mallee farm allotments in the Nullawil district became available for leasing and the resulting closer settlement brought about the formation of a village. A mechanics’ institute was opened in 1893 and the railway line was extended through Nullawil in 1895. Baptist church services were first held in 1897 and the township was proclaimed in 1898.

After 1901 water supply channels were provided, enabling farmers to diversify from wheat growing into livestock. Between 1905 and 1912 Nullawil gained a general store (1905), a licensed boarding house (1907), a Methodist church (1911) and football and tennis clubs. The population peaked during the 1920s with soldier settlement and British immigrants. A range of stores was opened in Nullawil and a Catholic church was opened in 1928. A drought in 1929 and the Depression which followed caused a loss of population. Further soldier settlement and a rural recovery after World War II revived local prosperity, but later poor seasons and long term price declines persuaded farmers to diversify into fat lambs, beef, pigs and turkeys.

Nullawil has a general store, a motor engineer, a recreation reserve (on a former wine shanty site), tennis and netball facilities, Uniting and Catholic churches, a public hall and bulk grain facilities at the railway line.

Click go the shears: stories of the wool industry in the Nullawil district, Nullawil, 2009

Ridging a bare paddock at Nullawil, 1945 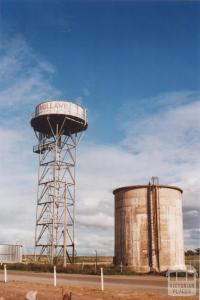