Ovens is a rural locality in north-east Victoria, situated on the Ovens Highway immediately north of the Mount Buffalo plateau and 5 km south-east of Myrtleford.

Ovens was originally known as Trapps Corner (Trapp being the name of a settler), and the name was changed to Ovens Vale in 1896. The shortening to Ovens came during the next two decades. The naming of the Ovens River came about from its visit by Hume and Hovell in 1824; Major Ovens was the Private Secretary to the New South Wales Governor, Thomas Brisbane.

Ovens occupies valleys formed by the Happy Valley Creek and the Ovens River, both relatively narrow but with considerable agricultural value. Upon the taking up of farm selections a school was opened in 1874. The Myrtleford to Bright railway was opened in 1890, with a station at Ovens. The Happy Valley Hotel, which is still there, was noted in 1910 in the Victorian municipal directory.

Ovens has been noted for tobacco growing, and the Tobacco Research Station (1950) was 3 km south-east. There is also a softwood plantation in the ranges to the north. In addition to the hotel there are bed-and-breakfasts for travellers.

The Ovens school closed in 1950 and the railway line was closed in 1983. A rail trail has a stopping place at Ovens.

Ovens’ census populations have been: 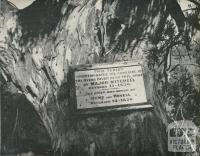 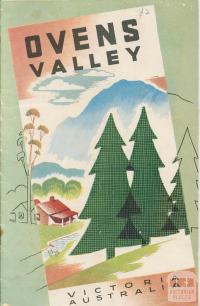 Tobacco Kilns in the Ovens Valley, 1953