Parkville, a residential suburb in three parts with Royal Park at its centre, is 4 km north of Melbourne. On its west is North Melbourne and on its east is Carlton.

Parkville is situated on a plateau with relatively shallow soils, which made it suitable for grazing but not agriculture. As the plateau is mostly mudstone or non-basaltic material it has not been wanted for quarrying, unlike Brunswick to its immediate north. In about 1845 a reservation for a park or open space was approved by the Governor of New South Wales (after a request for a smaller area by the Melbourne Town Council), extending from North Melbourne to Carlton and comprising 1036 ha.

The population increases after the gold rushes resulted in severances from the reservation for urban growth, and Royal Park of about 283 ha was proclaimed. In time further severances occurred: 1858, for an experimental farm of 575 ha in the north-west: 1861, for a zoological garden of 20 ha, for the Acclimatization Society in the middle of Royal Park; 1868, three areas for houses, forming Parkville North, South and West; and 1875, a further area enlarging Parkville South from Park Drive to Gatehouse Street, which enclosed a watercourse which later formed the linear Ievers Reserve.

Parkville was described in the 1903 Australian handbook:

Parkville South is the largest of the three residential areas, and before its 1861 severance it included land and a showground used by the Port Phillip Farmers Association and Melbourne council markets for horses, pigs and cattle and for hay and corn. The pastoral activity at the south end and the model farm at the north end were linked by grazing and agistment over Royal Park which lasted until the 1920s, keeping up to four dairies going in Parkville.

An early surviving example of a Parkville house (1873) is at 44 Morrah Street, a single storey cottage with an attic. More often, two storey terraces or semi-detached houses were built, with considerable moulded and wrought iron decoration. All of the residential part of Parkville South is a Conservation Area under the Register of the National Estate. The balance of Parkville South (ie the markets area), was given over to an enlarged University High school (1929), Royal Melbourne Hospital and Royal Dental Hospital (1944 and 1963). In 1957 another severance next to Parkville South was made for the Royal Children's Hospital, which was opened in 1963.

Parkville South has a few shops along Royal Parade and Naughton's Hotel is a popular venue for residents and for University students from across Royal Parade.

The University of Melbourne is bounded on three sides by Carlton, but is in the Parkville postcode area.

Parkville North is linear shaped, with Royal Parade as its main frontage and The Avenue as a crescent-shaped western boundary. It contains research, educational and theological institutions, numerous blocks of flats and some notable Queen Anne Federation-style houses.

Parkville West is the smallest of the three, facing Flemington Road near the Flemington Bridge railway station. The surrounding traffic noise was made louder when the area was chosen as the entry point for the Tullamarine Freeway. Fortunately Royal Park provides an expansive ‘backyard’.

In both world wars Royal Park was a site for Army camps. After World War II the housing shortage persuaded the Victorian Housing Commission to use ‘army huts as transit camps’. The settlement at Royal Park was named Camp Pell, lasting for ten years, frequently being used to accommodate families who had been evicted by the Commission's slum reclamation program. Camp Pell gained a degree of notoriety, with some residents being classed as incorrigible, but communal facilities were scarcely uplifting. By the late 1950s the residents were rehoused in Commission estates at Heidelberg West, Doveton, Preston, Maidstone and Broadmeadows. Camp Pell primary school ran from 1952 to 1956. When Camp Pell closed, Royal Park was free of occupation whether by crowded housing or grazing stock, and Melbourne Council embarked on a program of building ovals, cricket pitches, hockey and netball facilities and a baseball venue in it. A public golf course is north of the Zoo. The north-west corner's model farm, however, was kept aside for the Commonwealth Serum Laboratories, social welfare facilities and the Mount Royal Hospital and accommodation for elderly persons. Mount Royal's occupation began in 1878 when it took over a disused Industrial School for children, situated in Royal Park.

Parkville and Royal Park have tramlines along Royal Parade and through the park to Brunswick. A train line also crosses the park, intersecting with the tramline near where a railway station is provided for the Zoo. The train line also had an Inner Circle connection running eastwards to Fitzroy North.

Parkville's median house price in 1987 was 267% of the median for metropolitan Melbourne, and figures at approximately that level were maintained through the 1990s. The price level signifies the desirability of houses in Parkville, and the regard in which they are held by the residents. This was never more evident than in the 1980s when rear extensions to a house by a well known football player resulted in litigation amounting to hundreds of thousands of dollars, ending with the Council granting money to pay the litigants' costs. The ‘Wade Case’ made town planning history.

The owners of 88 properties in Parkville, Clifton Hill and Collingwood were offered a voluntary buyout in 2014 and another 100 were being compulsorily acquired as part of the East West Link project. 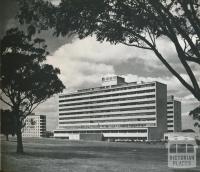 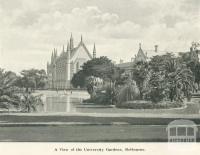 View of the University Gardens, Melbourne, 1900 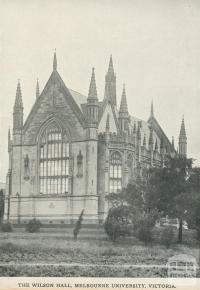 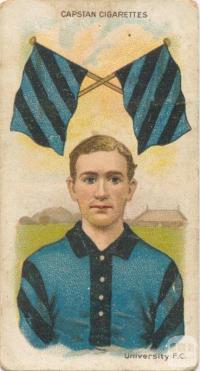 The University of Melbourne, 1905 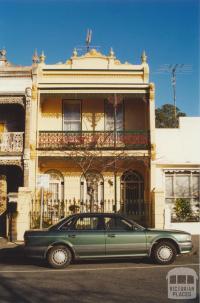