The Patch is a mainly rural locality, 40 km south-east of Melbourne, next to the east side of the Sherbrooke Forest.

In the 1860s a timber-getter felled a stand of black-butts for palings, and the cleared area ten years later was found to be a grassed patch of land. It was named The Patch. A part of Monbulk has come under the locality now considered to be The Patch.

Farming selections became available in the 1890s, many coming under berry production. A post office was opened in 1897. Berry growing supplied the Monbulk jam factory as well as metropolitan markets. The Church of Christ was not built until 1934, the community hall in the 1950s and the primary school in 1983-84. The hall is near the post office, the general store and the school. The Patch contains the area previously known as Coonan and Fairy Dell.

It remains a small township and scenic area, but its school (288 pupils, 2014) serves residents in outlying parts of Kallista and Olinda. 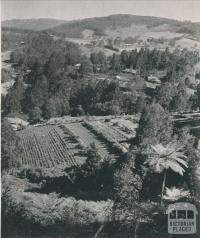 Panorama over The Patch