Picola is a rural village and district in northern Victoria, 11 km north-west of Nathalia. Its name is thought to derive from an Aboriginal word either describing an Aboriginal sub-group or meaning whirling or rushing water.

During the early period of farm-selection settlement, Picola vied with Nathalia because of Picola's proximity to the Echuca to Tocumwal coach route, its general store, Union church and primary school (1879). Nathalia's position on the Broken Creek, compared with the absence of a substantial watercourse at Picola, probably caused Picola to fall behind.

In 1896 the railway line was extended from Nathalia to Picola. The railway was used for transporting wheat, livestock and red gum taken from the Barmah State forest and milled at Picola.

The Nathalia area was affected by intermittent dry seasons, and during the 1930s local opinion strengthened in favour of irrigation from the weirs being constructed on the Murray River. The carting of water for domestic purposes from Broken Creek ended in 1950 when a town dam and water tank were constructed.

Picola has a mixture of irrigated farms, wheat growing and timber milling. The village has a church, a hall, an oval, tennis courts, a bowling green and a hotel.

Picola has had census populations of:

Gillian Hibbins, A history of the Nathalia Shire: the good helmsmen, Hawthorn, 1978 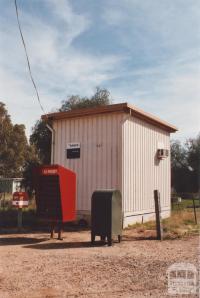