Pitfield and Pitfield Plains are a rural area south-west of Ballarat and 15 km south of Linton. They were the southern part of the gold fields along the Woady Yaloak River valley, and part of the gold region running in an arc from Scarsdale to Rokewood.

Gold was discovered at Pitfield in 1855, and it is surmised that Pitfield was named after a gold escort officer. An Anglican school was opened in 1858. In 1865 Bailliere’s Victorian gazetteer described Pitfield as flat and agricultural, pastoral and mining. There were a post office and a hotel. The gold mining declined within about ten years and the school closed in 1872.

In the 1890s there were new gold discoveries north-east of Pitfield at Cape Clear and south-east at Pitfield Plains. A school was opened at the Pitfield Plains Salvation Army hall in 1898. The Victorian municipal directory, 1899 described Pitfield Plains as a rapidly increasing mining area with 1000 people. By 1900 there were two district newspapers and a third one combined with Rokewood. Most community amenities were at Pitfield, 5 km north-west, as described in the Australian handbook in 1903: 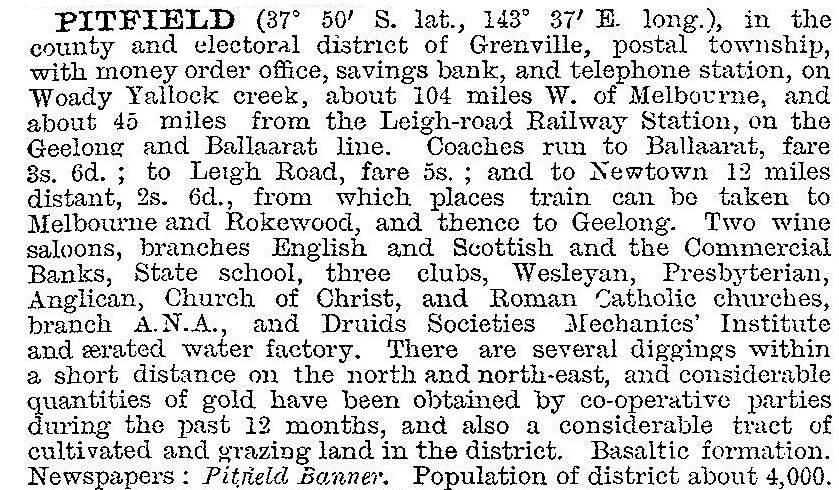 A mining village named Kaleno, about 3 km east of Pitfield, was recorded in the Victorian municipal directory (1902) with a population of over 1500 people.

By 1904, though, mining at Pitfield Plains had declined and the mines at Berringa (15 km north-east) had overtaken it. Pitfield Plains then underwent subdivision for farms. A railway line from Newtown to Cressy, was opened in 1911 about equidistant between Pitfield and Berringa, hopefully to tap the carriage of agricultural produce and the wood for mine props and steam boilers. The line closed in 1953.

The Pitfield Plains school closed in 1925, and the district is now a farming one. Numerous mullock heaps stand up from the flat landscape and along the sides of the Woady Yaloak River valley.

Pitfield/Pitfield Plains census populations have been: 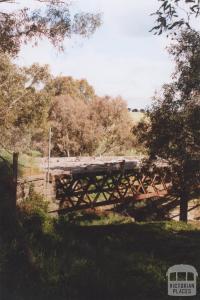 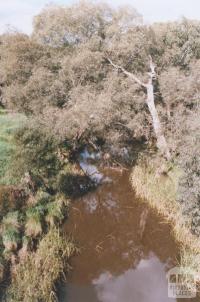