Pomborneit is a rural locality in western Victoria situated on the Princes Highway between Camperdown and Lake Corangamite. There are also the lesser localities of Pomborneit North and Pomborneit East. All are in the western part of the countryside known as the stoney rises, a recent volcanic landscape bestrewn with material from the Mount Porndorn volcanic cone which is about 2 km south of Pomborneit.

Pomborneit is on the eastern edge of the Purrumbete pastoral run that was taken up by the Manifold brothers in 1838. (They took their flocks over the stoney rises, which were settled pastorally in 1844).

By the 1860s the wild rabbits which Thomas Austin released near Winchelsea had successfully acclimatized and were spreading into the Western District. The stoney rises offered an excellent rabbit breeding environment, and the Manifolds disposed of part of the area for farm selections. A small settlement was already situated around a coach stopping place, which became the Pomborneit village. A school was opened in 1869 in a Presbyterian church.

Apart from the church, a general store, a railway station (1893) and a hall there was little else in the way of public buildings. The surrounding country, however, supported a population of nearly 500 people in 1911 on the numerous farms. A conspicuous feature of the farms is the stone walls that substitute for paddock fences, formed by clearing the stones to the perimeters and skilfully built as dry stone walling. An unfortunate feature of the walls has been their suitability as a protective overlay for rabbit warrens, unless the foundations are sunk in a trench.

In February 2009 residents of Pomborneit counted themselves lucky during the Black Saturday bushfires as no lives were lost. The fire, however, burnt out 1300 hectares and destroyed livestock, fences and farmland.

The census populations for Pomborneit and Pomborneit North have been:

If these walls could talk: report of the Corangamite dry stone wall conservation project, Terang, 1995 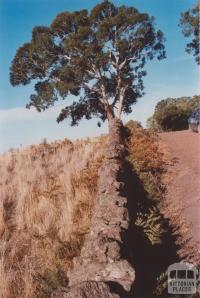 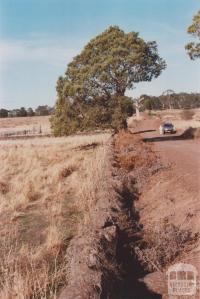