Porepunkah, a small rural township in north-east Victoria, is situated on the Ovens River a few kilometres east of the Mount Buffalo plateau. It was named after the Portpunka pastoral run that was taken up in 1846, located east of the Ovens River and extending from Eurobin to south of Bright.

Gold discoveries at Bright in the mid-1850s were followed by other gold workings throughout the Ovens Valley, including Porepunkah. It developed as a mining and agricultural township and in 1880 the Victorian municipal directory recorded Porepunkah as having a school (1873), a post office and two hotels.

In 1890 the railway line was extended through Porepunkah to Bright, benefiting the district by the transport of agricultural produce and with improved access for tourists and skiers at Mount Buffalo. Two Porepunkah families, the Carliles and the Manfields, opened a hospice and a hotel, collecting travellers from the railway station and acting as guides. Alice Manfield became a wellknown guide. In 1903 Porepunkah was described in the Australian handbook:

The State government constructed a road from Porepunkah to the top of the Mount Buffalo plateau and two years later built a chalet. Porepunkah gained an increasing proportion of travellers who disembarked there rather than the more distant Bright. Porepunkah's sawmillers supplied timber for the chalet.

In 1915 the Forests Commission began establishing pine plantations in the Ovens Valley, initially to vegetate tailings from gold dredges, and ultimately a plantation was established near Porepunkah.

After World War II hop growing and tobacco at Porepunkah were replaced with dairying and grazing: tobacco was concentrated northwards at Myrtleford and rabbit infestation had spoilt agriculture until the coming of myxomatosis in the 1950s. Increasing tourism in the Ovens Valley and at Mount Buffalo provided a substitute industry in accommodation and ski hire. The closure of the railway line in 1983 had little or no effect on tourism until it was made into a cycle and walking trail.

Porepunkah has a hotel/motel, caravan parks, holiday flats, a general store, a public hall, a Uniting church, a public reserve and a school (106 pupils, 2014). Swimming in the popular spot on Ovens River at Porepunkah was patrolled by council lifeguards from 2014.

Porepunkah's census populations have been: 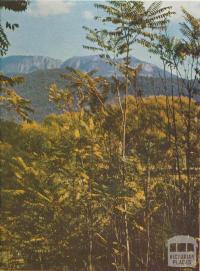