Red Cliffs is a rural township in north-west Victoria, 15 km south of Mildura. The name came from the 60 metre high cliffs along the Murray River a few kilometres east of the township. The Chaffey brothers, originators of the Mildura irrigation colony (1887), stated that Red Cliffs had been their first choice for settlement, but pumps were unable to raise the water over such a height above the river level for irrigation.

Upon the cessation of World War I in 1918, the Victorian Government chose Red Cliffs for soldier-settlement farms. It was to be the largest such settlement in Australia, ultimately amounting to 796 farm blocks, most of them 6.5 ha, during 1920-23. Three-million grape vines were planted using the Carwarp pumping unit to irrigate them. In 1922 the Red Cliffs pumping plant, designed to irrigate 6070 ha, was completed. Grape vines were chosen, so that farmers could get a quicker return with dried fruit, rather than with wine-making or slower-bearing stone fruits. Citrus and tomato-growing were later established. There was a railway (1903) for carriage of produce from the Mildura district to Melbourne. Three packing sheds were opened at Red Cliffs.

Clearing the land of Mallee scrub was initially left to the settlers. Mechanised clearing with a large traction engine sped the process. The engine, originally built for carting wheat over soft Wimmera tracks, had traction wheels two metres wide. Known as ‘Big Lizzie’, it originally took two years to travel from Melbourne to the Wimmera. It is restored and displayed at Red Cliffs.

Early accommodation was in tents. A former wool shed was brought to Red Cliffs for use as a hall, and a police station, post office, bakery and co-operative trading store were established by 1922. Red Cliffs school was opened in 1921 and Red Cliffs East school in 1924. A public hall, named Diggerland, was used for meetings, concerts and cinema. The Roxy Theatre was opened in 1937 when the population was about 3000 people. Anglican, Catholic, Methodist and Presbyterian churches were built in 1922-23.

During the 1930s depression members of the secret White Army patrolled the Red Cliffs pumping station, guarding it against rumoured invasion by unemployed saboteurs. The White Army was supported by returned service personnel and was active in other rural centres such as Donald in the Wimmera district.

At the outbreak of World War II (when an active Red Cliffs RSL sub-branch was 15 years old) the Victorian municipal directory recorded the following amenities:

There were also a district hospital and a Catholic primary school (1933).

In 1946 4540 ha of Red Cliffs were under irrigation, one-third of the total area. Vines for dried fruits occupied over 90% of the irrigated area.

Although the census populations dipped to under 3000 after World War II, a Mildura shire civic centre (1961) and a high school (1961) were opened in Red Cliffs.

Red Cliffs has a large reserve with a caravan park, ovals and tennis courts, three smaller parks with a swimming pool, bowling facilities and war-memorial gardens, a public hall and four churches. A golf course is north-west of the town. There are Catholic and State primary schools and a secondary college. Business interests have a chamber of commerce and a tourist promotions group (1996). The Settler news is published weekly. There are Lindemans Karadoc winery (east of Red Cliffs) and Alambie winery (between Red Cliffs and Irymple). A tourist information centre and museum are in the former railway station and court house. Tourists have motel accommodation and there is a hotel. The former hospital was merged with a nursing home in 1993, and there are flats and special accommodation for elderly persons. A community plan in 2009 identified a number of opportunities and issues for the town. Fluoridation of the town's water began in 2010.

The Sunraysia Modernisation Project in 2014 began rolling out the upgrade of irrigation systems and pump stations at Red Cliffs, Merbein and Mildura.

The census populations of Red Cliffs have been:

Ken Mackenzie Wright, A land fit for heroes: the story of the soldier settlement of Red Cliffs after World War I, the author, 1995 (mainly biographies of the Red Cliffs settlers) 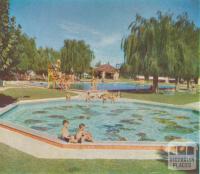 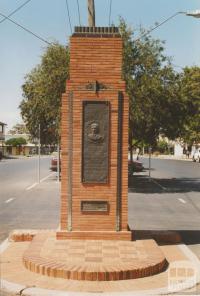 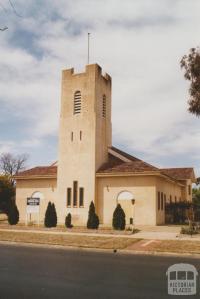 The Murray River at Red Cliffs 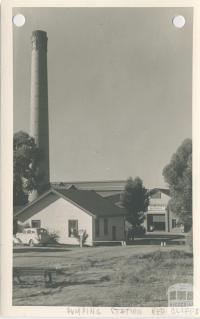