Redbank, a rural village on the eastern slopes of the Pyrenees range in central-west Victoria, is on the Sunraysia highway, 22 km north-west of Avoca.

A gold discovery at Redbank in 1860 resulted in a rush of about 2000 people, and a town was surveyed in 1861. The origin of the name is uncertain, but it possibly described a mine earthworks or something similar. There is red clay soil.

A gold discovery elsewhere later in 1861 emptied Redbank of much of its population, and it settled into being a minor mining locality with some farming. A school was opened in 1867. Mining continued until after 1900, and in 1937-41 electric dredging and sluicing were used for gold extraction. In 1903 the Australian handbook described Redbank:

(The Shamrock Hotel is a structure dating from 1861 and continued trading as the Shamrock and Thistle.)

Several streams leave the slopes of the Pyrenees and enter the Redbank Creek, providing useful areas of farmland. In the early 1970s the Redbank vineyard was established, the second of several making up the Pyrenees wine region.

Redbank has three former churches, a former racecourse, a hotel, numerous old gold workings, a substantially intact cemetery, and a reservoir which supplies reticulated water. The school closed in 1993.

Redbank’s census populations have been: 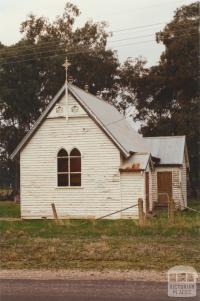