Redesdale is a rural village where the Campaspe River is crossed by the road between Heathcote and Kyneton. It is situated in a valley and is 27 km north of Kyneton.

Redesdale was named after Captain Robert Rede, the goldfields commissioner at Ballarat during the time of the Eureka rebellion. The locality was first known as Monro’s Crossing, the place of a ford across the Campaspe River used by the pastoralist Henry Monro who took up land in 1838 which he named the Campaspe Plains Run. Monro’s Crossing was about in the middle of his pastoral run. It was used by miners moving between Kyneton and the Heathcote (McIvor) goldfield. A hotel was established at the crossing in 1855.

During the 1860s settlers took up farm selections and there was a substantial Catholic population in the Redesdale district. A Catholic school and chapel were opened in about 1865, and the St Lawrence Catholic church (1874), of English Gothic bluestone design, has outlasted the Presbyterian and Bible Christian building (1875) so far as active congregations are concerned. In 1868 an unusual steel lattice-truss bridge was built across the Campaspe River immediately north of Redesdale. It is on the Australian and Victorian historic buildings registers. In 1871 the Redesdale township was surveyed and town blocks sold. Redesdale became a substantial agricultural township and a district railhead in 1891 when a branch line was opened from near Kyneton. The line carried sawn timber, dairy produce and rabbit meat and pelts.

The Redesdale district has the Calder and Hume Highways about 20 km to its west and east, placing it away from those main transport corridors. The township has shrunk since the closure of the railway in 1954, although its general hotel and school continue. (The school also serves the Mia Mia district on the other side of the Campaspe River, and had 42 pupils in 1999 and 24 pupils in 2014.)

South of Redesdale is Barfold, named after William Yaldwyn’s Barfold pastoral run (1838). It was on the Redesdale railway line and had a timber mill and quarry. The scenic Turpins Falls are nearby. West of Redesdale is Sutton Grange, also named after a pastoral run (1840). The district had a good dairying capacity. Its Uniting church (1865) continues and the school building (1870) made of granite, has continued community use. Soldier settlers were given farm blocks near Sutton Grange in the 1950s.

In the Black Saturday bushfires of February 2009, twelve homes as well as sheds, livestock and fences, were destroyed in Redesdale. 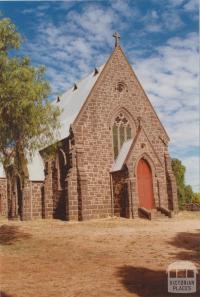