Rosanna is a residential suburb 12 km north-east of central Melbourne, about 2 km beyond Heidelberg.

In 1838 the land around the Warringal (Heidelberg) village was divided into nine portions of between one and two square miles. Portion 5, one of the largest, immediately north of the village reserve was sold to James Watson. He named it Rosa Anna farm after his wife, Elizabeth Anna Rose. Watson soon subdivided and sold lots from his Rosanna Estate, although about four-fifths of Portion 5 remained as an intact estate in the early 1890s. One reason for this was that Heidelberg did not achieve a railway connection until 1888, and then only to Collingwood: a commuter had either to take a tram from Collingwood to Melbourne or continue by train by a westerly route. A direct train link was made in 1901, and the extension of the line past Heidelberg, through Rosanna and on to Eltham was made the following year.

In 1910 the Eaglemont Golf Club vacated its original links in favour of more open country near the Rosanna railway station on the eastern side of the railway line, calling itself the Yarra Yarra Golf Club. In 1926 the club gave up trying to promote better quality greens and opted to move to the sand belt area. Its Rosanna links became open to the public until sold in 1936 with a plan of subdivision. The new owner kept it as the ‘Rosanna Golf Club’ and made improvements to the greens.

Rosanna was briefly noted in the Victorian municipal directory until the early postwar years as having a railway station, school, telephone bureau, a church and sporting clubs. In 1949 the shops along Lower Plenty Road, west of the railway crossing, consisted of a fuel merchant, post office, storekeeper, fruiterer, butcher and an estate agent. Numerous houses were being built, and two dairy farmers were east of the crossing. Ten years later there were 24 shops, including clothing and homewares. The growth of the local shopping centre signified the housing growth. In the next ten years housing spread outward from the railway line, and a three-fold increase in rates made the golf club move eastwards by 3 km.

Rosanna has an active shopping centre near the railway station, a community centre, a Catholic primary school, four churches and a sports reserve. The western side of the former golf links has been kept as open space, with the Salt Creek running through it and there is a linear park along Banyule Creek. Southwards there are the Warringal parklands and the Banyule Flats Reserve, adjoining the Yarra River. The eastern part of the golf links became the Elliston Estate, developed by the innovative Merchant Builders in 1969-71.

Rosanna’s census populations have been:

The change in population in 2006 resulted from a south-east part of Rosanna (east of Beverley Road) being transferred to Heidelberg. 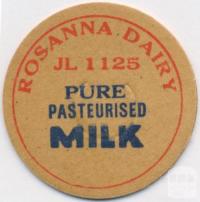