Rubicon is the site of hydroelectric power generation stations and of former extensive timber harvesting operations. It is 93 km north-east of Melbourne and 20 km south-east of Alexandra. It is on the Rubicon River, which joins the Goulburn River near Thornton.

In 1907 timber harvesting began in the Rubicon forest, and tram routes and saw mills were built in the ensuing years. The opening of the railway spur from the Melbourne to Mansfield line to Alexandra in 1909 gave timber producers a more convenient railhead. When the population of the Rubicon timber settlements was about 90 in 1920, a school was opened at Clark and Pearce's mill on the Rubicon River.

In 1924 the State Electricity Commission began construction of the Rubicon Falls power station, which came into operation in 1926. The SEC township at the junction of the Royston and Rubicon Rivers had provision for a store and other facilities, and a school was opened in 1928. Ultimately four generating stations were constructed, the others being on the Rubicon River (2) and the Royston River (1), with a combined capacity of 26,400 kilowatts.

Until 1939 when the Black Friday bushfires destroyed the first school and many mill facilities, the school was the social centre for the timber families. The second school survived the fire. After the fires it was more convenient for mills and their work forces to be located in Alexandra. The last of the bush sawmills was dismantled in 1953. The SEC township continued to have a store and post office until 1963, and the building became a holiday house. A sawmill for SEC maintenance works continued until the 1990s. In 1997 all the town's houses were put up for sale. Most were purchased and removed. 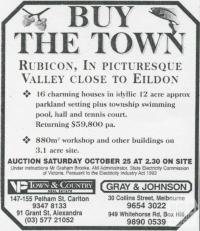