Sandridge was the name of the locality at the head of Hobsons Bay where colonial passengers disembarked to journey across the sandy land between there and the Yarra River, Melbourne. It is now known as Port Melbourne.

The name Sandridge was given by a surveyor, William Darke, in 1839, after the ridge of sand dunes along the beach. Darke marked a track to the infant Melbourne settlement for travellers and settlers.

Apart from Liardet’s Pier Hotel there were few other buildings at Sandridge for several years. In 1849 some township allotments were marked out and Sandridge was defined by six blocks west of the lagoon (now the Esplanade). There was a government jetty at the end of Bay Street, near the Pier Hotel.

After the influx of goldfields, population at Sandridge grew quickly to about 2000 inhabitants in 1854, and its boundaries expanded westwards and northwards to Raglan Street. Agitation began for separation from the Melbourne City Council, but a hiatus was reached when Sandridge was made a separate ward in 1856 that returned its own councillors. Eventually the agitation was successful and on 13 July 1860, Sandridge borough was proclaimed. The name continued until 25 January 1884, when the borough was renamed Port Melbourne. 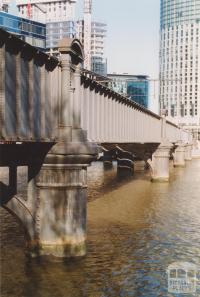