Sassafras, in the Dandenong Ranges between Olinda and Ferny Creek, is 35 km east of central Melbourne. It was originally called Sassafras Gully, descriptive of the damp, hilly terrain in which trees described as Sassafras were found.

The gully is Sassafras Creek, a tributary of the Woori Yallock Creek and Yarra River. West of the gully is a ridge on which the Sassafras township is situated. On the other side of the ridge several streams run down to the Dandenong Creek which enters Port Phillip Bay at Carrum.

The area was opened for selection in 1893, mainly consisting of about 500 ten acre farms, shortly before a period when tourists and excursionists were attracted to that part of the Dandenong Ranges. Little in the way of a township was established, being confined to a post office (1894), store, school (1894) and mechanics' hall. However, weekenders, larger residences and guest houses were built in considerable numbers. In 1918 thirteen guest houses were available, making Sassafras one of the leading resorts in the Dandenong Ranges. Two churches and additional shops were built in the township at about that time.

Tourists reached Sassafras by railway (Upper Ferntree Gully) or by improved road, but extension of road improvement in the 1920s caused tourists to travel further afield. Nevertheless, affluent Melburnians built residences in Sassafras and some organised the building of a Presbyterian church in 1937, now the Kennon Memorial Uniting church. A bowling green was also built. Families on ordinary incomes settled in Sassafras, making it more residential. Infant welfare and preschool play facilities were opened in the 1950s.

Sassafras maintains several attractions for day trippers, one of the churches now housing a gallery. The Nicholas Gardens and Nicholas Research Laboratories are on land formerly owned by Alfred Nicholas (1881-1937), Aspro manufacturer and philanthropist. The gardens were laid out between 1929 and 1937. His residence, Burnham Beeches, is an Art Deco Streamline Moderne building (1933) designed by Harry Norris, the architect of several large Melbourne buildings in that era. Burnham Beeches has been a hotel and function centre, but languished until purchased by chef-restaurateur Shannon Bennett and developer Adam Garrison. The new owners have made Burnham Beeches a food and accommodation destination, opening the Piggery cafe and Burnham bakery in 2014, with a steakhouse, brewery and accommodation to be open from 2015.

Sassafras has a shopping centre, a hall, a school (56 pupils, 2014), the Sherbrooke Community school (1985) and the Ferny Creek reserve and hall just inside its western border. Sassafras’ census populations have been: 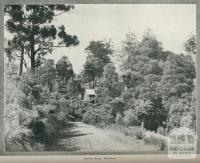 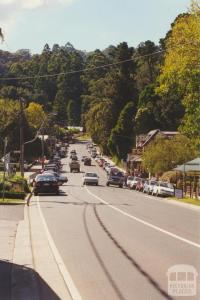 The township of Sassafras