Shelford is a rural village 52 km south of Ballarat, at the intersection of the Leigh River and the road from Geelong to Rokewood. The road was one of two into the Western District, the other being the road through Inverleigh to Hamilton.

In 1840 a ford across the Leigh River was replaced by a timber bridge at Shelford, and in 1843 the Settlers Arms Inn was built there by Captain Francis Ormond (see entry for Ormond). The inn was built by arrangement with George Russell, proprietor of the Golf Hill pastoral run. Russell later leased out land at Shelford for tradespeople and a storekeeper. A Presbyterian school opened during the late 1840s, and a Denominational school opened in 1853.

The school was known as The Leigh for some years before adopting the name Shelford. The inspiration for the name, possibly derived from one of several places of that name in England, is officially not recorded.

Shelford was the district’s principal town, and the road and bridge prompted the establishment of the Shelford Road District (1861), the forerunner of Leigh Shire. In 1861 Shelford’s population was more than twice Rokewood’s. The timber bridge survived until 1873 when it was replaced by a wrought-iron box birder bridge on masonry abutments. The bridge is on the Australian and Victorian heritage registers. Shelford also had a mechanics’ institute (1864), a Presbyterian church (1859) and two hotels.

Shelford was overshadowed by Rokewood, failing to secure either the shire offices (Rokewood) or the shire hall (midway between Rokewood and Shelford). It settled into an agricultural existence, as the river silt was fertile and the pastoral plains were extensive. In 1903 Shelford was described in the Australian handbook:

The Settlers Arms had been de-licensed in 1897. In 1921 a new hall replaced the mechanics’ institute. After World War II parts of Golf Hill and other large pastoral properties were subdivided for soldier settlement. The Golf Hill property became a mixed Merino sheep/Hereford stud, and retained the two-storey formal homestead (1876) which is on both heritage registers.

Shelford has a school (13 pupils, 2014), the Leigh church, a memorial hall and a recreation reserve.

Gladys Seaton, Gold reef and silver tussock: a history of the Shire of Leigh, Rokewood, 1988 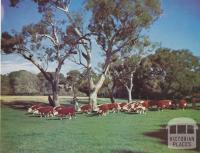 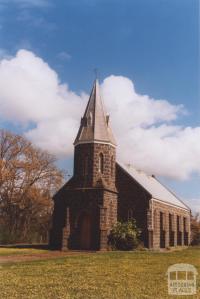 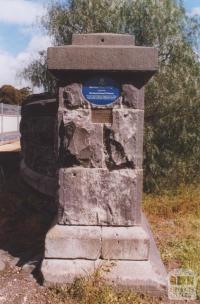