Sorrento is a township and resort on the Mornington Peninsula with beaches on Port Phillip Bay and Bass Strait. It is 62 km directly south of Melbourne and 8 km from Point Nepean at the end of the peninsula.

Sorrento was not named as such until the 1870s, 70 years after the first official, but non-permanent, European settlement took place there. Port Phillip Bay had been explored by British naval authorities in 1800 and 1802, and in the following years a British expedition comprising two ships and over 300 people were settled at Sorrento at Sullivans Bay, a small indent facing Port Phillip Bay. The motives for the settlement appear to have been Bass Strait sealing and forestallment of French settlement. Within seven months, however, the settlement was transferred to Tasmania in May 1804. The settlement site is reserved and there are a museum and 'early settlers' graves': there is doubt that the graves date from the 1803 settlement. There was a bicentennial re-enactment at the site in 2003. Controversially parts of the site were offered as the Sisters Estate subdivision in 2011.

Sorrento is underlain by limestone and, along with much of the western Mornington Peninsula, it was exploited for the Melbourne building trade, particularly after the gold rushes. Limestone has also been used for local building masonry. Apart from limeburners and fishing, a quarantine station was built at Point Nepean in 1859 mainly with the fear of plague-ship passengers in mind. A school was opened in 1855.

The transformation of Sorrento to a resort township came about from Melbourne interests. During 1863-68 the parliamentarian Charles Gavan Duffy and the theatrical entrepreneur George Coppin made exploratory forays, the former building a holiday house at Sorrento and Coppin trying to promote the area. It is thought that Duffy conferred the name Sorrento, presumably after Sorrento on the Gulf of Naples in Italy. In 1870 Coppin began the entrepreneurial development of Sorrento, bringing tourists by bay steamer to a newly built pier and opening the 'Ocean Amphitheatre' on the Sorrento back beach. The Sorrento Hotel was built in 1872. Within a few years a swimming baths was built, walking tracks formed and Sorrento Park along Port Phillip Bay foreshore was laid out. Regular bay steamer services brought vacationers and sightseers. A steam-tram service (1890-1921) conveyed visitors from the pier to the back beach.

Sorrento's township gained an Anglican church (1875) a mechanics' institute (1877), several more hotels and an Athenaeum hall (1894). During 1880-90 Sorrento's population more than doubled to about 600 people. In 1903 Sorrento was described in the Australian handbook: 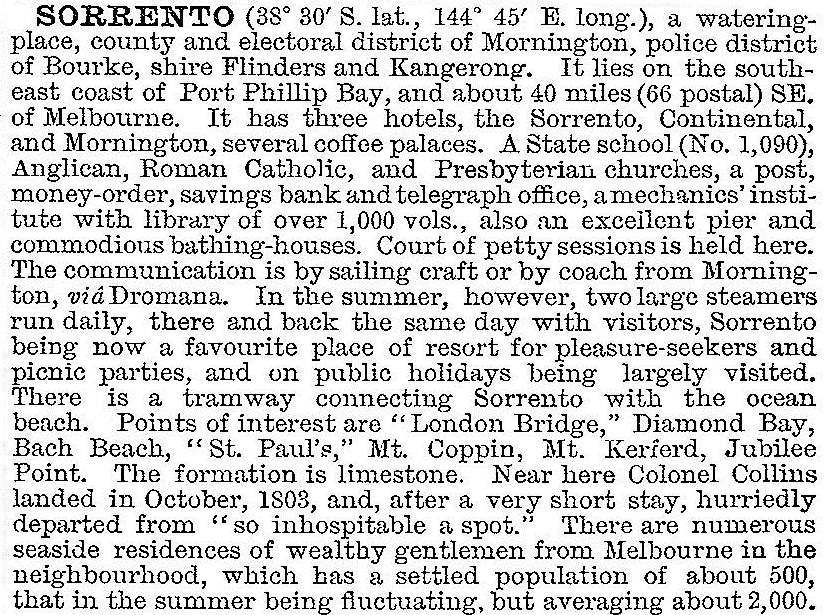 The Sorrento golf course was opened in 1903 and until 1942 bay steamers continued to bring visitors. In the 1920s there were seven guest houses and four large hotels. Motorised private transport did not significantly detract from Sorrento as a visitor destination until after World War II when neighbouring Portsea became a smarter place for holiday homes and vacationng. The Sorrento back beach's bays and coastal scenery were a tamer environment than the Portsea surf beach. Nevertheless, Broadbent's guide to Mornington Peninsula (1949) observed that it was hard to determine where Sorrento ended and Portsea began, and the bay foreshore's stretch of seaside homes was often referred to as 'the millionaire's mile'.

Back from the foreshore residents and tradespeople went about earning a living. Their lives are described in Kathy Skelton's Miss Gymkhana, R.G. Menzies and me, a story of small-town Australia (1990).

In the 1990s Sorrento defied the fate of many Victorian resort towns. Three of the four hotels remained, along with one of the guesthouses. There are also a hostel and three caravan parks. Coppin's Ocean Amphitheatre, lookout and walking tracks have been incorporated in the Mornington Peninsula State Park, a linear foreshore reserve that runs to Cape Schanck. Most of Sorrento is subdivided for housing, but tree cover is generous and undulating landscape conceals a landscape of roof tops. There is a reserve with tennis and bowling facilities, and a foreshore reserve with camping areas and beaches along Port Phillip Bay. The main street had a comprehensive range of shops, although some of the facades have been overdone with heritage nostalgia. The Nepean Historical Museum is in the mechanics' institute. There are Anglican, Catholic and Presbyterian churches and State (307 pupils, 2014) and Catholic (1932) primary schools. ferries provide regular car and passenger services to Queenscliff on the western side of Port Phillip Bay.

Sorrento's census populations have been:

Richard Cotter, No place for a colony; Sullivan Bay, Sorrento and the Collins settlement, Kew, 2001 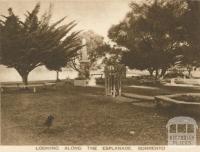 Looking along the Esplanade, Sorrento 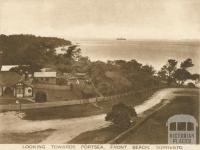 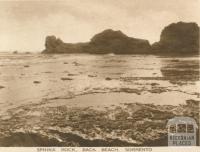 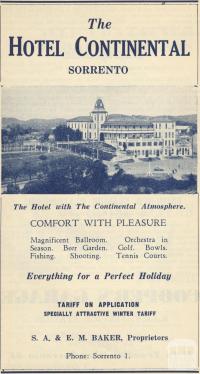 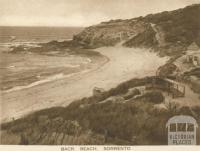 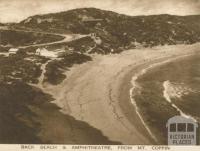 Back Beach and Amphitheatre, from Mt Coppin, Sorrento 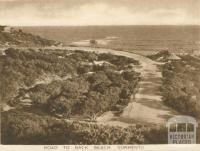 Road to Back Beach, Sorrento

Sorrento Pier from the Tramway Hill, 1905