Spotswood is a residential and industrial suburb 7 km south-west of central Melbourne, separated by Stony Creek from Footscray to its north.

Its name came from John Stewart Spottiswoode, a resident, who purchased land there in 1841. (His daughter married Richard Seddon who became Prime Minister of New Zealand, and the locality of Seddon in Footscray is named after him). Apart from pastoral activity, industry in Spotswood was the quarrying of basalt, used for building, road surfacing and for ballast in ships leaving the port at Williamstown.

Spotswood’s flat land ultimately attracted industry needing larger areas than were available in the older industrial spaces east of the Yarra River. In 1891-92 the Robinson and Company agricultural implement factory was built in Hall Street. Until the H.V. McKay harvester works at Sunshine, Robinson was one of the largest implement makers in Australia. At about the same time the recently formed Melbourne and Metropolitan Board of Works was designing a metropolitan sewerage system, connected to treatment lagoons at Metropolitan Farm, Werribee. The sewerage main had to cross the Yarra River and traverse the low lying land on its western shore. The design called for a rising main, supported by a pump.

Spotswood was chosen for the pumping station. It was close to the river for the unloading of coal to fire the pump machinery, and the basalt ground provided a stable foundation. The engine houses’ elaborate polychrome brickwork marked them as a high point of industrial architecture. The pumping station complex (1897) and the Robinson factory are on the Victorian Heritage Register.

The remaining shoreline was later filled by the Australian Glass Manufacturers factory (1890) and an array of oil tank farms, the first being Shell oil and kerosene (1916). Spotswood did not attract as many residents as neighbouring Newport, although there were sufficient to require a primary school to be opened in 1890. (In 1911 its census population was 771, one third of Newport’s). There was undeveloped land for housing to be built in the 1950s. In 2014 Spotswood primary school had 176 pupils.

Spotswood has a small shopping centre near the railway station. To the west the Spotswood Railway Workshops were opened in 1926-29. Further west is South Kingsville, a residential area which has been subsumed by Spotswood in some street directories. On its north, the West Gate Freeway skirts Spotswood, subtracting from the open space beside the Stony Creek. As one passes along the freeway, golfers can be seen below on the Westgate golf course, and a reserve and oval on the other side of the freeway. A memorial park for those killed in the West Gate bridge collapse in 1970 is at the end of Simcock Avenue, under the bridge.

Spotswood’s industrial heritage has been commemorated in a film made in 1990 about a moccasin factory. Its leading actor was Sir Anthony Hopkins. Somewhat more enduringly the State Museum established Scienceworks at the pumping station site, a blend of science and technology on display, along with tours of the pumping station complex. There are several industrial sites around Scienceworks, including freight and fuel. 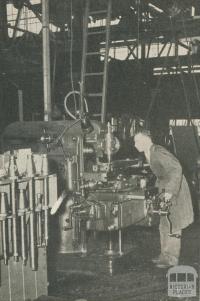 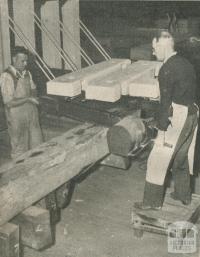 Buffer stops being turned out, Spotswood, 1950