Swanpool is a rural village on the Midland Highway, 23 km south of Benalla in north-east Victoria. The highway links Mansfield and Benalla, and the area around Swanpool was a convenient stopping place. The Broken River is about 1 km east of the highway, and it is thought that the name came about from swans resting on part of the river.

Farm settlers requested the provision of a school in 1869, and one was opened two years later. It operated in conjunction with schools at Lima and Lima South. A dairy co-operative and a butter factory were established in the 1890s, later becoming the Swanpool and Moorngag Butter Making and Dairy Co-op and operating until the 1970s.

In 1914 a railway from Benalla to Tatong was opened, with the Lima station a short way north-east of Swanpool. It was a short-lived rural freight line, closing in 1947. Swanpool planted an avenue of honour along the Midland Highway in 1920. The highway is also flanked by Anglican and Uniting churches, a bowls club, a general store and a public hall. The hall is notable for hosting old-time cinema, Fridays to Sundays. There is also a recreation reserve and a local football and netball team. The Swanpool and Tatong netball and football clubs resisted merger with Goorambat in 2013. Swanpool school outlasted Lima and Lima South, and is a campus of Peranbin primary college.

Swanpool's census populations have been: 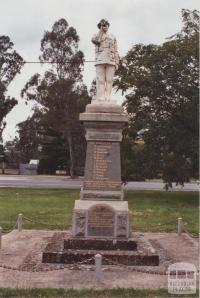