Teesdale is a rural town 27 km north-east of Geelong and 10 km east of Bannockburn. It was apparently the name of an outstation of T & S Learmonth, pastoralists, who occupied the Native Creek run in the mid-1830s.

In 1852 a town was surveyed on the Shelford-Bannockburn Road where it crosses Native Hut Creek. Settlement followed, as gold miners left mining and opted for steadier occupations. A Presbyterian church and school were built in 1858. Within one or two decades there were also Methodist and Catholic churches, a mechanics’ institute (1874-1969). The combined store/hotel/post office (1852) had diversified into separate businesses by the 1860s. Leigh Shire council (1864) had offices for its secretary and engineer at Teesdale until 1916, although the shire hall was at the more centrally positioned Warrambine, between Shelford and Rokewood. In 1903 Teesdale was described in the Australian handbook: 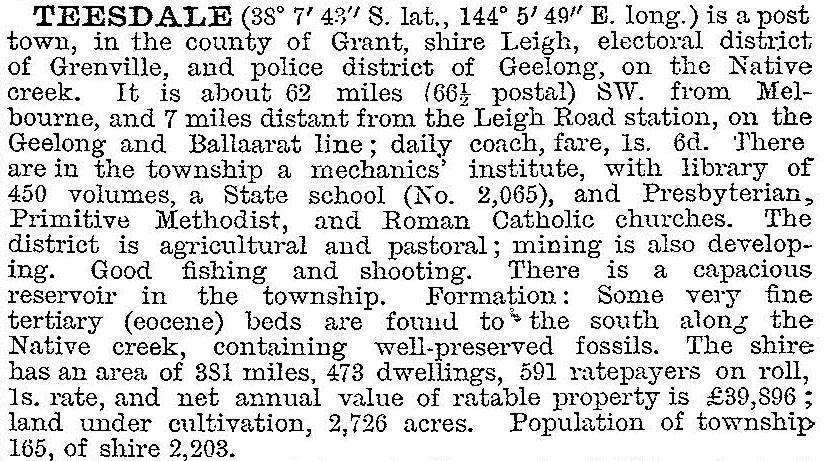 The Presbyterian school was replaced by a government one in 1878. Teesdale had active cricket and football (Sheldale Rovers) teams, and the town recreation reserve has had tennis courts and a pavilion added to it. Part of the reserve contains grassy woodland with manna gum and diverse ground-cover plants.

Teesdale has a general store/post office, a public hall (built 1973 after the mechanics’ institute burnt down), a primary school (183 pupils, 2014) and the historic Presbyterian church.

Residents produced the Teesdale Community Plan in 2011 with priorities including a town centre and walking and bike tracks to Bannockburn.

Margaret Allen, A history of the Teesdale school and district, Teesdale, 1978