Thomastown is a residential and industrial suburb 15 km north of central Melbourne, with a station on the railway line to Epping. Unlike the land further west which is littered with basalt, Thomastown has fertile soil which was suitable for immediate settlement. In 1848 the Thomas family began market gardening. Two years later William Westgarth purchased land to the north of the Thomas' holding, which he allotted to German settlers. Both were near Edgars Creek.

The villages developed. Westgarthtown, in which the cemetery and Lutheran church survive in German Lane, and Thomastown in the vicinity of Spring Street, so named because a primary school opened in the mid-1850s and many of the pupils and the surrounding population had the surname Thomas. The German settlement had a school from 1856 to 1864. Several farm buildings (1850s to 1860s) are heritage listed.

The Thomastown district had a large dairy herd in the 1870s and attracted horseracing and coursing by the Findon Hunt Club from Mill Park. The railway to Epping opened in 1889. In 1903 the Australian handbook described it:

Thomastown remained an agricultural area until the expansion of metropolitan Melbourne after World War II, notwithstanding the opening of Fowlers pottery in 1928 and the electrification of the railway line. Milk production and distribution grew during the 1930s when a German dairying family formed the Pura Dairy, ultimately to expand into Preston and became Metropolitan Dairies Pty Ltd (1948). Further expansion gave it over 30% of Melbourne's milk supply by 1964. The growth of milk production, however, did not disguise the decline in Thomastown's population during the Depression, and it took until 1946 to recover its 1911 census figure.

There is a strip shopping centre in High Street parallel to the railway station but little other shopping east or west of there. Edgars Creek runs along a linear park which is next to a reserve with ovals. Thomastown East has a grid street configuration, predating the later configuration in Thomastown West which protects residential streets from through traffic. On the south of Thomastown there are numerous factories and an electricity terminal station, near which there is the metropolitan ring road (2008). The Hume Freeway is near Thomastown’s western edge. Thomastown’s eastern boundary is the Darebin Creek, beyond which is Bundoora. Both streams have linear parks. The one along Merri Creek, Galada Tamboore is a flood plain with escarpments, gullies, woodlands and grasslands.

The census populations of Thomastown have been:

Residents from Italy, Greece and the former Yugoslav Republic of Macedonia continued to be above average proportions of Thomastown’s population. There are two Catholic primary schools (1974, 1977) in the east and west of Thomastown respectively.

J.W. Payne, The Plenty: a centenary history of the Whittlesea Shire, Lowden Publishing, 1975 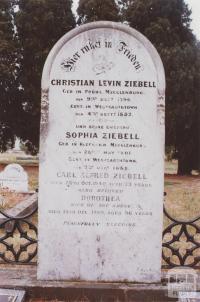