Tooradin originates from the Aboriginal too-roo-dun meaning swamp monster (ie bunyip). A bayside township near Sawtells Inlet, Western Port Bay, it is situated on the South Gippsland Highway in the City of Casey, 58 km south-east of central Melbourne. Its foreshore has mangroves backed by salt marsh and peaty clays.

European settlers in the area included Frederick and Charles Manton who took up the Tooradin cattle station in 1840. In 1852, it was purchased by John Mickle, William Lyall and John Bakewell. Samuel Rawson and Robert Jamieson used Tooradin as their port for regular short sea journeys to and from their Yallock Station about 10 km east of Tooradin. William Lyall began living at Harewood Homestead east of the present day township in 1868. Aborigines were inhabiting the area in the 1870s.

Tooradin, as a village, began in the 1870s as a depot for road construction material. In 1869, the first subdivision took place and the Tooradin Inn was built. (The present Tooradin Hotel is on the same site.) A store and post office and school followed in 1875. Cheesemaking was a local industry at this time. By 1877, daily coaches travelled to and from Melbourne. In 1888, the railway to Tooradin opened, on the first section of the Dandenong-Port Albert line.

Due to the abundance of game and fish, Tooradin became known as the 'Sportsman's Paradise'. There was also a local fishing industry and a row of fishing cottages on the east side of Sawtells Inlet. The 1903 Australian handbook entry described the township:

By 1917, Tooradin was a recreational location for city dwellers for whom shooting, hunting, fishing and boating were popular pastimes.

In more recent years efforts by the local community and the release of higher land north-west of the town has enabled growth in this low-lying, flood-prone area. The duplication of the South Gippsland Highway through to Phillip Island along with the housing developments in nearby Blind Bight, Cannons Creek and Warneet have further contributed to the development of the town.

The Foreshore Committee (formed in 1934) has been responsible for the restoration of the 'Fisherman's Cottage' (1875) - purchased in 1968 by the Cranbourne Historical society – and financing of a boat ramp. In addition to the cottage there are two heritage homesteads: Harewood (1868) and Tooradin Estate (1880s) in Lynes Road.

Facilities include a hotel, a sports club with dining and gaming facilities, an Anglican church, a public hall, football and recreational reserves, pre-school and primary school (251 pupils, 2014), and a number of mainly take-away food shops. Fishing is no longer an industry but continues as a recreational pusuit.

Surrounding farmland supports horses and cattle, poultry and market gardening, but many of the town's residents commute to work in larger centres such as Dandenong. From nearby Tooradin Airfield (1968), crayfish are flown in from Flinders Island in Bass Strait. Tourists can take sightseeing flights.

Population rose gradually and families have tended to stay in the district. In 2009 Tooradin was named as one of the coastal communities most at risk from climate change and rising sea levels over the next 100 years.

J.J. Jenkin, The geology and underground water resources of the Tooradin area, Melbourne, 1962

David Roberts, From swampland to farmland: a history of the Koo-Wee-Rup flood protection district, Rural Water Commission of Victoria, 1985 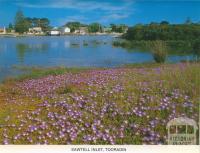 The Foreshore, The Jetty, Tooradin