Underbool is a rural town in the Mallee region, north-west Victoria. It is on the Ouyen Highway and railway line to Pinnaroo, South Australia, and is 50 km west of Ouyen.

In 1903 the railway to Mildura was opened, running via Ouyen. Shortly afterwards it was found that a band of country west of Ouyen appeared to be suitable for dry farming, and test bores confirmed the availability of water. The State Rivers and Water Supply Commission (1905) constructed catchment tanks, and the railway line west of Ouyen to Underbool, Murrayville and Pinnaroo was opened in 1912. Underbool lay at the edge of bore water of acceptable quality, and it took until about 1930 when enough water was available from channels supplied by the Western Waranga system and Grampians storages.

Settlers took up Mallee farms around Underbool, and in 1913 a school was opened and a public hall built. By 1918 there were several stores and businesses, but no hotel until 1925. A bush nursing centre was opened in 1917 and a Methodist church in 1925. Other denominations conducted services, but not in church buildings until 1958 (Catholic) and 1966 (Anglican). The Underbool Mirror newspaper was published from 1925 to 1957.

Underbool has a recreation reserve and the sports facilities previously mentioned, a public hall (1970), a bush nursing centre, a general store, railway siding silos and grain bunkers, a hotel, Anglican, Catholic and Uniting churches and a school (19 pupils, 2014). The hotel kitchen, accommodation and dining facilities were damaged by fire in 2010. Over 800 tonnes of grain escaped from a hole in the side of an ageing concrete silo in 2009 with a further leak in 2013.

At the 2011 census, the Uniting church had affiliation with 30% of the district’s population, and farming accounted for 49.5% of employment.

Underbool’s census populations have been:

Underbool and district early days: souvenir, back to Underbool, 1963 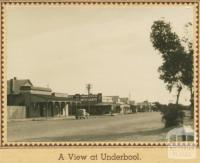 A view at Underbool