Walpeup is a rural township in the Mallee region, north-west Victoria, and is 29 km west of Ouyen. It is situated on the Ouyen Highway and the westerly railway line, which pass through a band of settled country flanked on the north and south by the Murray-Sunset and Big Desert National Parks respectively.

In 1903 the railway line was extended northwards from Woomelang via Ouyen, finally joining with Mildura. In South Australia, good farming land had been found at Pinnaroo, directly westwards, and an investigation indicated that the country between Pinnaroo and Ouyen was of similar quality. Test bores confirmed the availability of water. The State Rivers and Water Supply Commission (1905) constructed catchment tanks in 1910-11, coinciding with the westerly railway line from Ouyen to Murrayville (1912), a distance of 110 km, just 26 km short of Pinnaroo. Farm selections along the railway route were first offered in 1909.

A store was opened at the site of Walpeup in 1909 and a school was opened in 1912 in a public hall. The Walpeup shire was proclaimed in 1911, but having its administrative centre at Ouyen and alternating Council meetings between there and Murrayville.

‘Walpeup’ is derived from an Aboriginal word with several ascribed meanings: one meaning a stumpy tailed lizard and another is an indigenous acacia.

By 1920 Walpeup had a population of about 400 people, with a general store, a blacksmith, a butcher, a bank branch and other businesses. In 1923 a brick memorial hall replaced the original public hall. The Mallee was growing about 45% of Victoria’s wheat, and farmers wanted a research farm devoted to Mallee conditions. In 1932 the Walpeup Research Station was opened, selected because of the site had a range of typical Mallee soils and average climatic conditions.

There have been Anglican, Lutheran, Presbyterian, Methodist and Catholic congregations at Walpeup, and Anglican, Lutheran, Uniting and Catholic churches continue. Walpeup also has a golf course, a caravan park, the artificial Walpeup Lake for swimming, town reservoirs, a general store and a school (7 pupils, 2014). Water supply is by channels from Grampians storages and the Waranga Western Channel as the bore water at Walpeup is too saline.

Research work at the Mallee Research Station at Walpeup, managed by the Department of Environment and Primary Industries (State government) after it took it over from Sunraysia Institute of TAFE (SuniTAFE), ended in 2009 and the community was faced with establishing a viable alternative use for the site.

Walpeup’s census populations have been:

At the 2011 census, about 25% of the population was affiliated with the Uniting Church (Australia, 5.7%) and farming accounted for 53.8% of employment. 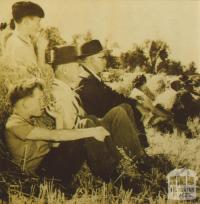