Werrimull is a rural village in a remote part of north-west Victoria known as the Millewa Settlement Area of the Mallee region. It is about midway between Mildura and the South Australian border. (The Millewa area is discussed in the entry for Mildura shire.)

Werrimull is the main centre for scattered settlements along the Sturt Highway and the Red Cliffs-Meringur Road (which the railway line paralleled), terminating westwards at the Murray-Sunset National Park. Closer-settlement farms of about 260 to 320 ha were taken up in 1923. The farms were too small being in a dryland farming area with erratic spring rains and annual falls as low as 140 mm in drought years. The land was prone to erosion and sand drift, particularly when regularly cropped for wheat. Consolidations took place after the severe drought years of 1943-45. Stock-water channels supplied from the Murray River were sand-drifted and abandoned. A piped supply from the river and Lake Cullulleraine replaced the abandoned channels in 1975.

Werrimull was named after an Aboriginal word thought to describe an emu. Two years after settlement a school was opened. Immediately before the bad drought years of 1943-45 the Victorian municipal directory recorded Werrimull as having a hotel, stores, churches, a police station, a school and State Rivers and Water Supply Commission offices. A Catholic church (1933), of Romanesque design, signified pre-war rural optimism. A large wheat silo was built in about 1940.

After the post-drought population loss, several small district schools were closed, and a consolidated school was established at Werrimull in 1946-47. It had a school population of 125 in 1968.

Werrimull has a Parks Victoria office, a police station, a hotel, a public hall, a general store, Catholic and Uniting churches, pre-school facilities, and wheat-storage facilities. The railway line closed in 1988. In 2014 its Prep-12 school had 57 pupils.

Werrimull’s census populations have been:

Bruce McLean, Rails to the Millewa North: a history of the Red Cliffs to Morkalla railway, Australian Railway Historical Society, 1975 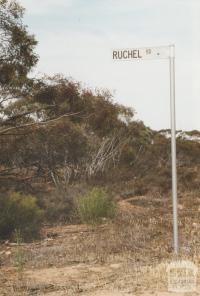