Whittington is a residential suburb 4 km south-east of Geelong. The name appears to have been adopted early in the 1920s, in honour of an early landowner, James Whittington.

Originally the area was known as Breakwater (after the structure built across the Barwon River to prevent the inflow of saltwater, so providing freshwater for the infant Geelong), and as St Albans. In 1871 a horse trainer, James Wilson, established a successful stables and two years later expanded them by buying a property that had been occupied by a meat preserving works. They were near the Geelong Racecourse at Geelong East. In 1873 Wilson built the St Albans homestead (Victorian Heritage Register), and went onto a wider sporting career. He trained the mare, Briseis, winner of the Derby, Melbourne Cup and Oaks in 1876.

The names St Albans and Whittington coexisted for about 30 years, with Whittington taking over when residential development rapidly spread through its area during the 1960s. Over 500 Housing Commission units were built there. A State primary school opened in 1978.

The Geelong East primary school and technical school (later a TAFE) adjoin Whittington and the St Albans reserve. The original town centre in Wilsons Road has the homestead, St Albans Uniting church, originally a Methodist church (1869) and the Anglican church. East of Wilsons Road the road design changes from a grid to one with culs de sac to inhibit through traffic. There are numerous neighbourhood reserves. Small shopping centres exist in the original town centre and in the later estate near the primary school (100 pupils, 2014).

In about 1999 all of Whittington south of Townsend Street was detached and named St Albans Park. This left the Anglican church just inside the reduced Whittington, and the Uniting church and St Albans homestead in the new suburb.

Whittington's census populations have been:

In 2010 the enrolment at the State primary school was 97. 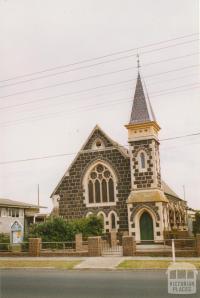