Wilson’s Promontory, the most southerly point of the Australian mainland, is about 250 km south-east of Melbourne. It was originally part of the granite ridge connecting Tasmania to the mainland. Rising sea levels after the last glacial period, ten thousand years ago, submerged much of the ridge, isolating mountaintops as islands. Wilson’s Promontory was reunited with the mainland as blown sand accumulated between islands, forming the low Yanakie isthmus.

The area was visited seasonally for food collecting by the Brataualung tribe. Middens and fragments of stone tools have been found among the coastal dunes. The first recorded sighting of the promontory by Europeans was by explorer George Bass in 1798. Thinking it an island, Bass named it Furneaux Land. Sometime later it was renamed after Thomas Wilson, a London merchant and friend of fellow explorer Matthew Flinders.

From the early 1800s sealers and whalers operated in Bass Strait, often using the east coast of Wilson’s Promontory as a base. By the 1840s the seal population was reduced to a remnant and whaling was in decline.

In the late 1840s a sawmill was established at Sealers Cove, the site of earlier sealing and whaling operations. Timber was transported to the beach by flying fox and wooden tramway. Sawmilling ceased in the late 1850s after the better timber was removed. Another mill worked for a few years from 1903, utilising regenerated timber. A long pier was built at this time, and a few piles are still visible.

As shipping in the coastal waters around the promontory increased, the rugged coastline claimed a number of shipwrecks. In 1859 a lighthouse was completed on the south-east cape, built of local granite by convict labour. Soon after a telegraph line was installed to the lighthouse from Foster to the north. The lighthouse is heritage listed, and since being de-staffed the staff cottages are used for visitor accommodation.

Much of the promontory was leased for pastoral runs from the 1850s, but only small numbers of cattle were grazed there. By the 1870s apart from the Yanakie run on the isthmus connecting Wilson’s Promontory to the mainland, there was little grazing.

Naturalist Baron von Mueller visited Wilson’s Promontory in 1853 and again in 1874, collecting many plant specimens now preserved in the national Herbarium. In 1884, three members of the Field Naturalists’ Club of Victoria visited the promontory. Their enthusiasm for the area led to a campaign for a national park.

In 1892, an attempt to establish a township on the northern point was unsuccessful. In 1898, after controversial proposals for grazing angora goats and for settling Scottish crofters, most of Wilson’s Promontory was temporarily reserved for a national park. This was made official in 1905 and in 1908 the area around the coast was added. Despite this, in 1920 when tin was in great demand, a mine was established at Mount Hunter in the north and was worked until 1926.

The declaration of the park generated great interest in the area despite its inaccessibility. Visitors could come by boat from Port Welshpool and walk across the isthmus from Corner Inlet or drive from Fish Creek, finishing the journey at low tide along a plank road on the beach. A ranger was appointed in 1909 and surveys of the flora and fauna were undertaken. A cottage at Darby River, on the western shore, was extended to accommodate guests, being known as Darby River Chalet. Tidal River, further south, was also a popular camping spot. By 1939, a new road had been constructed from Foster. However, the park was closed to the public during World War II. An army commando training camp was established at Tidal River, and a road built between Tidal River and Darby River. After the war the camp buildings at Tidal River became the base for a holiday village, providing lodges and a camping area, and park headquarters moved there.

A major bushfire devastated much of the park in 1951, prompting construction of fire access tracks. A serious rabbit problem was overcome, allowing vegetation regrowth in many areas. In 1969 part of the Yanakie isthmus was added to the park.

The promontory’s woodlands are fire prone, either from lightning strikes or controlled burns which get out of control. It is also prone to heavy squalls and rainfall which can dislodge the gritty soil surface and cause slippages.

Over the years facilities at Tidal River have been improved. The camping area has been extended, lodges modernised and new accommodation provided. The village now has a general store, a medical centre and an Information Centre. Walking tracks have been upgraded and overnight camp sites established. Visitor numbers have soared from 27,000 a year in the late 1950s to nearly 500,000 a year by the mid-1990s.

Wilson’s Promontory’s attraction is its spectacular scenery, with rocky coastlines, rugged mountains and good beaches. The vegetation is particularly diverse, ranging from rainforest to heathland. Although now quite accessible, the park offers a wilderness experience to all. Catering to varying capabilities, bushwalks range from less than an hour to several days duration. The atmosphere is unsophisticated, hence in 1996 a government proposal to construct a large hotel at Tidal River encountered great public opposition and was shelved. Plans were resurrected in 2012. The group Friends of the Prom was formed to oppose development.

Wilson's Promontory's census population has been:

The lighthouse, situated on the South Eastern point of Wilson's Promontory 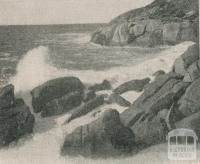