Windermere is a rural locality 15 km north-west of Ballarat on the railway line to Ararat. It was probably named after Windermere in the English Lakes District, but was known as The Bridges at least until 1865.

Windermere has been associated with Burrumbeet to its west (through the Burrumbeet Park and Windermere Racing Club) and with Cardigan to its south. It is on the Ballarat to Ararat railway line, and its station and goods shed were built in c1885 and 1889.

In 1860 a school opened in Windermere for the nearly exclusively Presbyterian farming population. In 1909 its name was changed to Cardigan. Nearer to Burrumbeet, however, a second school (also Presbyterian, opened in 1857) was renamed Windermere in 1909. Windermere was mentioned in the 1903 Australian handbook:

Despite the possibility of Windermere being overawed by its neighbours, it recorded a census population of over 300 persons in 1911. In addition to its mechanics' institute (rebuilt 1932) and school it had a church, a hotel and a chaff mill. In 1901 the Burrumbeet and Windermere Co-operative Society was formed at a meeting at the Windermere hall. It started a co-op store at Windermere and later had a larger store in Doveton Street, Ballarat.

Windermere is the centre of a large farming area. The main activity is sheep grazing for wool and meat. In the 1960s there was an active Young Farmers Club. North of Windermere is Cardigan Village, a residential area. The school had 57 pupils in 1998 and 22 in 2010 and closed in 2012. The Windermere Hotel, however, is somewhat removed, being on the old Western Highway at Cardigan Village.

Windermere's census populations have been:

Back to Windermere, centenary celebrations April, 1963 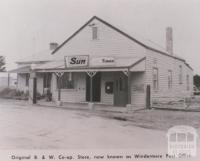