Wonga Park is a rural suburb and urban locality 29 km north-east of central Melbourne, between the southern bank of the Yarra River and Croydon North. Its western and eastern boundaries are Jumping Creek and Chirnside Park respectively. The name comes for the Wonga Park grazing property, where the 1867 Melbourne Cup winner had been trained. Generally, though, the area was part of Mooroolbark until the 1890s.

In 1889 the Wonga Park property came into the hands of an insurance company and, along with other holdings, the land was sold by the Wonga Park Land Co. Four years later, when small settlements were a way of relieving unemployment after the failure of the land boom, about 20 members of an Eight Hours Pioneer Memorial Association took up small holdings on a former timber reserve. Their settlement was the square mile immediately north of Launders Avenue and Toppings Road. They succeeded in having a primary school opened in 1895, first called Warrandyte East, but renamed Wonga Park in 1898. The area was a mixture of orchards and grazing properties and timbered land. Most smaller properties had been started with income from firewood that came from clearing the land. Wonga Park village had a hall (1908) and an Anglican church (1920).

One of the grazing properties, Yarra Brae, was acquired by the Hon L. Clifford in 1940. After being a war-time army training area, Clifford made it available for Australia's first Pan Pacific Scout Jamboree in 1948. Clifford Park also hosted jamborees during the 1950s.

In 1972 Yarra Brae was the site of a proposed lower Yarra River reservoir, but residents of the nearby Bend of Isles bushland estate persuaded the Victorian Government to abandon the proposal. The allied Sugarloaf Reservoir at Christmas Hills went ahead.

The residential development of Wonga Park came after the subdivisions in Croydon and Mooroolbark, which were on the Maroondah Highway and a railway line. Residential living has spread from around the old village settlement where the Anglican church, hall, sports facilities, fire station and a few shops are found. The State primary school (307 pupils, 2014) is north of the village. Southwards there are a general store and three more churches. The northern boundary of Wonga Park, where land was acquired for the Yarra Brae storage, is a linear riverside part of the Warrandyte State Park.

Wonga Park’s census populations have been:

Wonga Park heritage study stages 1 and 2, for City of Manningham, 1997

Wattle with the Dandenongs in the background, 1958 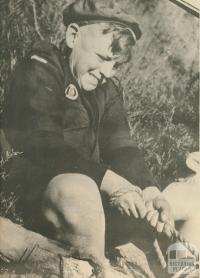 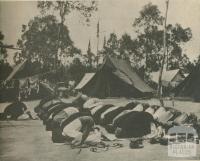 Pakistan and Malay contingents at the Pan-Pacific jamboree, Wonga Park, 1950