Wyndham Vale’s residential development began in the early 1980s. It has the Iramoo primary school which opened in 1978 (Iramoo being the name given to the district by John Batman when it was settled) and the Manor Lakes P-12 college (2009). There are three drive-in shopping centres, two small ones towards the south of the suburb and another in Manor Lakes Boulevard with provision for expansion. A Catholic primary school (2009), community centre and library are nearby. The Manor Lakes locality may become the centre of the suburb as there is a large undeveloped area further north. The regional rail link to build a dedicated line for trains from Bendigo, Ballarat and Geelong to separate them from metropolitan trains outside Melbourne was begun at Wydham Vale in 2012 with completion in 2016. The Wyndham Vale South school opened in 2015.

Wyndham Vale shares a linear park with Werribee along a flood way reserve, and has another linear park along the Lollypop Creek, with lakes, sports facilities and a walking trail. The large Presidents Park beside the Werribee River has several ovals. The Werribee River is Wyndham Vale’s north and east boundary. At the most northerly point there is the Cobbledick ford on the river, near where Samuel Cobbledick built a bluestone farm house in 1868. The house stands out on a rise in the landscape.

Wyndham Vale’s census populations have been: 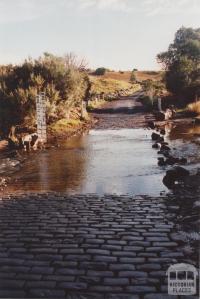