Abbotsford, a residential and industrial suburb, is in the east of Collingwood, between Hoddle Street and the Yarra River. It is 3 km north-east of central Melbourne and was named after a property owned by John Orr in the vicinity of St Heliers Street and the Abbotsford convent.

In the 1850s a land auction for the ‘Abbotsford township’ was promoted, the site being between the Convent of the Good Shepherd and Johnston Street. It was the most attractive part, on the riverbank, as west of it was the low-lying Collingwood flat.

The western side of Abbotsford has the railway line from Collingwood to Heidelberg (1888) and Princes Bridge to Collingwood (1901). The town hall and other civic buildings (1880s) are next to the railway station. This precinct includes the heritage listed town hall (1885), the former Church of Christ (1889), RSL hall and Anglican church parsonage. A short way north is Victoria Park, the home of the Collingwood Football Club (1892). There is a railway station, and the primary school (1899), closed in 1995. Alongside Victoria Park in Lulie Street is Dorothy Terrace, eight row houses (1888), on the Victorian heritage register.

Two notable buildings are in the east of Abbotsford, either side of a loop in the Yarra River which runs around the Yarra Bend Park. The first is the Convent of the Good Shepherd (1864), subsequently enlarged for a home for girls. It became the Institute for Childhood Development in the 1980s, a campus of La Trobe University and the home of several not-for-profit bodies and the Sofia Mundi Steiner school. Responding to a plan to rezone the convent site for development in 1998 the community-based Abbotsford Convent Coalition was formed and succeeded in having the site retained as a community asset in 2004 to be managed by the Abbotsford Convent Foundation as an arts and cultural precinct.

The Collingwood Children's Farm is on the river bank. Around the river loop is the Abbotsford brewery. Opened in 1904 by the Melbourne Cooperative Brewing Company Ltd, it was absorbed by Carlton and United Breweries in 1909. It passed into foreign hands in 2011 when purchased by Anglo-African brewing giant SABMiller.

Industry in Abbotsford is mainly on the river. The Johnston Street approach features the former Yarra Falls textile factory and the skipping girl neon sign, a remodelled copy of the sign on top of a vinegar factory. A little north, Dights Falls are in the Yarra River, near where the Merri Creek enters. John Dight formed a mill race in about 1839 for making flour. Dight's Paddock was the site of the Victoria Park Oval.

Abbotsford's northern boundary is the Eastern Freeway and Alexandra Parade. The Parade was previously Reilly Street, constructed above the Reilly Street drain which was important for reducing the swampiness of the Collingwood flat.

There are a few shops in Johnston Street and a larger strip in Victoria Parade on Abbotsford's southern boundary.

In common with Collingwood, Abbotsford underwent moderate gentrification in the late 1980s and 1990s. In 1987 the median house price in Abbotsford was 96% of the metropolitan median and in 1996 it was 133%. A notable example of gentrification was the conversion of a heritage listed hat factory in Nicholson Street to apartments.

Abbotsford's census populations have been:

Abbotsford is an upwardly mobile suburb. Residents' median income was 38% above the Victorian median at the 2006 census and 53% higher at the 2011 census. Many live in row houses and flats, with above-average rental occupancies.

‘The flat and the hill: conserving old Collingwood’, Department of Planning and Housing and the City of Collingwood, 1991 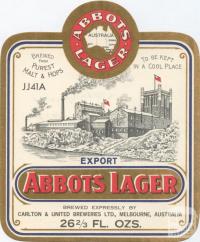 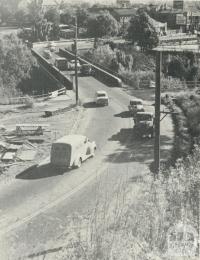 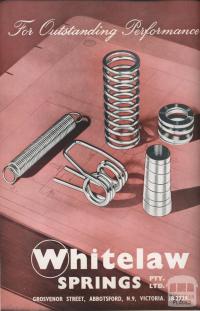 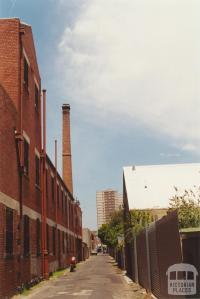