Apollo Bay is a coastal township and holiday resort on the Great Ocean Road, western Victoria, between Lorne and Cape Otway. The bay faces east, and is further protected by a breakwater. Behind Apollo Bay there are the Otway Ranges, partly forested and partly cleared for grazing and dairying. The town is adjoined by the Marengo tourist centre and caravan park.

In 1846 a schooner ‘Apollo’ sheltered in the bay on the way from Port Phillip to Portland. A few years after that event, timber cutters began taking timber from Apollo Bay and Lorne, and by 1853 the coast had been surveyed in detail and there were several timber camps. A township proposed to be named Middleton, was surveyed on Apollo Bay. The strong demand for railway sleepers for Victoria’s post-gold rush expansion brought up to 1000 timber workers during the early 1860s.

Farming began in 1864 along the Barham River flats, immediately south of the bay, by the Cawood family who in the next decade built a guest house. The combination of a relatively sheltered bay, the best of the limited flat land along the coast and the Cawood settlement finally stimulated the sale of town lots (renamed as Krambruk) in 1877.

A school was opened in 1880, and two hotels, a store, a Methodist church and a mechanics’ institute were opened during 1885-90. Access to Krambruk was by coastal vessel or by pack track over the ranges. In 1898 the name Apollo Bay (by which the settlement was generally known) was formally adopted by the post office. In 1903 Apollo Bay was described in the Australian handbook:

A butter factory was opened in 1904. In 1914 a bush nursing centre was opened, and during the 1920s the Great Ocean Road was constructed. The road coincided with the formation of the Apollo Bay Progress and Tourist Association, the reticulation of town water, the construction of a golf course and tennis courts and the opening of an all-weather road from Colac. In 1936 a telephone cable was laid, linking Apollo Bay, King Island and Tasmania. The breakwater (c1949) provides the only reliable shelter between Port Fairy and the Bellarine Peninsula.

During the postwar years the town’s population stayed at about 830 to 980 people, but tourist activity increased with the attraction of beaches and the Otway Ranges. During the 1960s there were four guest houses, three hotels, two motels and four caravan parks. In 1998 there were two hotels, nine motels, a range of apartments and holiday cottages and about the same area for caravans and camping.

Apollo Bay has a hospital, a community centre, Anglican, Catholic and Uniting churches, State Prep-12 and Catholic primary schools. The state school had 239 pupils in 2014. There are facilities for golf, swimming and tennis, a surf life-saving club, a large shopping strip, a fishing cooperative and a sawmill. The butter factory closed in about 1970, but dairying activity continued.

The Apollo Bay and Otway Agricultural Society has annual shows on the recreation reserve and the old cable station in Great Ocean Road is a history museum.

Immediately south of the town there are the Barham River flats and a coastal reserve and, on higher land, Marengo. There are a motel, a caravan park on Cape Marengo, the Apollo Bay cemetery and several houses. Between Apollo Bay and Marengo a controversial planning approval was given in 2007 for Great Ocean Green, a development of over 500 houses, a golf course and hotel on 170 hectares of land considered to be degraded. Despite land fill, the site was considered liable to flooding on the flat terrain.

Apollo Bay has become a significant tourist centre. At the 2011 census employment in accommodation was 18.1% of total employment, compared with a national average of 1.2%.

Apollo Bay’s census populations have been:

Apollo Bay and Marengo census populations have been:

G.M. Hendricksen, Paradise by the sea: memories of Apollo Bay, the author, 1989 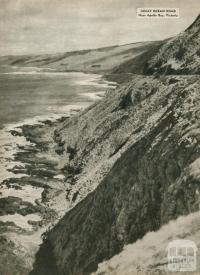 View of the beach, harbour and township, Apollo Bay, 1973

The Harbour with hills behind, Apollo Bay