Avon Plains, a rural locality in the eastern Wimmera region, is 32 km west of St Arnaud. It was named after the Avon Plains pastoral run (1846), situated near the Avon River which was named by the New South Wales Surveyor General Thomas Mitchell, on his Australia Felix expedition in 1836.

The Avon River’s headwaters are between St Arnaud and Navarre, and it joins the Richardson River which flows through Donald to Lake Buloke. Avon Plains is about 10 km north-east of the junction of the two rivers.

Farm selections were taken up in Avon Plains in the early 1870s. In 1876 local farmers at the Avon Plains hotel formed a farmers’ association. A school was also opened in a Wesleyan chapel.

Avon Plains is a grazing and agricultural area which has never had significant rail or road access but the locality was closely settled around the 1890s. In 1903 it was described in the Australian handbook:

In 1919 a memorial shelter pavilion, housing war honour rolls, was erected at the primary school. Ninety years later the pavilion still stood. The school closed in 1947. A few kilometres north-east there is the Lake Batyo Catyo rural water storage (1961) which has aquatic and camping facilities.

Avon Plains’ census populations have been:

George Walker, A link with the past, being a short history of Avon Plains and district, 1926 and 1984 (facsimile) 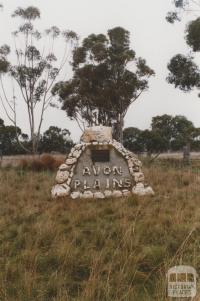