Bamawm is a rural village in the Rochester Irrigation District, 17 km north-west of Rochester and a little further south-west of Echuca. Bamawm Extension is about 5 km north of Bamawm.

Now an irrigation area, Bamawm was a dry farming area when first settled, consisting of plains with numerous small seasonal watercourses. It is thought that the name was derived from an Aboriginal word meaning creek, the full name for the district was Pannoo Bamawm, meaning ‘little creek’. In the 1870s the Restdown and Wharparilla pastoral runs were partially subdivided for farm selections. They extended as far west as Kotta and beyond that was the Pine Grove pastoral run which was also subject to selection. The pattern of farm settlement from Bamawm to Pine Grove is evident from the opening of local schools: Pine Grove, Tennyson and Milloo (1875), Bamawm (1876) and Bamawm South (1879). Methodist churches were opened at Kotta (1876), Bamawm (1876) and Pine Grove (1894), an Anglican church at Milloo (1886) and a Catholic church at Tennyson (1890s).

The extension of the Waranga Western Channel west of the Campaspe River in 1909 brought irrigation to the Bamawm district. Closer settlement farms were taken up in 1911 and within three years farm holdings had increased sevenfold to 150. Substantial government aid was provided for housing and livestock. Farms took up dairying, orchards, vegetable growing and lucerne cropping.

Bamawm Extension is an irrigation settlement which came a few years later. By the early 1920s another four district schools had been opened; Bamawm Central (1912-54), Bamawm East (1912, renamed Ballendella), Bamawm Extension (1919-54) and Bamawm Estate (1922-48). (The closures of the schools after World War II evidences the effect of the establishment of the township of Lockington on the railway line (1915) which bisected the area).

Whilst the Bamawm district had populations of 700-800 people from 1920 to 1960, the Bamawm village had only two churches, a hall, a store and a post office. Its strength has been in sporting competitions, with teams in football, soccer, basketball and tennis. Market gardening and orchards continued until the 1950s, but most have given way to dairying.

Bamawm and Bamawm Extension each have a hall and a recreation reserve, and Bamawm has a Uniting Church. Bamawm’s census populations have been:

The Extension’s census populations have been:

In 2011 the Bamawm census areas were cast rather wider than before, including the locality of Kotta and extending from Ballendella in the south to Wharparilla. Census data was:

Live and prosper: a record of progress in Rochester and district during the period 1854 to 1954, Rochester Centenary Celebrations Committee, 1954 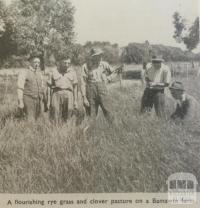 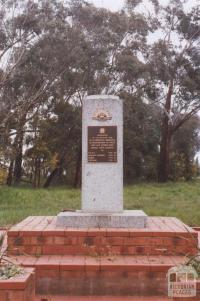