Baw Baw is thought to be an Aboriginal expression for ghost or bandicoot, and is the name of a mountainous plateau east of Melbourne and directly north of Moe. The Mount Baw Baw alpine village attracts both downhill and cross country skiers.

Mount Baw Baw is in the north of the shire, surrounded by alpine and cool temperate forests. The area's most productive industry has been timber harvesting. In the south of the shire there are the Strzelecki Ranges and their foothills, enclosing productive dairy land from the south of Trafalgar to Ellinbank and Longwarry. Although the Strzelecki Ranges are productively more significant than the Baw Baw plateau, the name was possibly too hard to spell or explain as the name for a shire. (Paul Strzelecki was an influential explorer of Gippsland, 1840-41.)

Settlement of the Baw Baw Shire's area came from the north through gold mining (Matlock, Walhalla etc, c1862) and along the Gippsland track which approximated the future railway/freeway corridor. Forest covered hills and swamps hampered settlement, but the Gippsland railway provided an all-weather transport route. Towns such as Drouin and Warragul sprung up and local government started with the Buln Buln Shire (Drouin) and the Narracan Shire (Trafalgar) in 1878. Warragul Shire was excised from Buln Buln in 1881 and Morwell Shire was excised from Narracan in 1892. Narracan Shire was further reduced when Mirboo Shire was created in 1894.

Farming, and especially dairy farming, became the staple industry. The brown coal industry lay outside Narracan Shire in the Latrobe valley, but there were small mines at Coalville.

The Gippsland railway (1878) had branch lines from Warragul to Noojee (dairy produce, timber) and from Moe to Walhalla (gold, minerals, timber, dairy produce) and to Thorpdale (timber, potatoes, dairy produce).

North of the railway, of equal importance to timber harvesting, there is water harvesting. The Thompson Lake (1984) holds 1,068,000 megalitres and is a drought reserve source for Melbourne. Water is carried by tunnel to the Upper Yarra reservoir.

Blue Rock Lake (1984, 208,000 megalitres), north of Moe, supplies the Latrobe valley, much of the water used for coolant for electric power generation.

The three main towns along the railway/freeway corridor, and their populations have been at the 2006 and 2011 census: 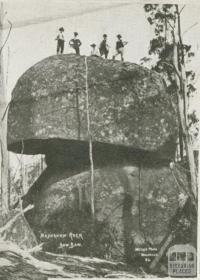 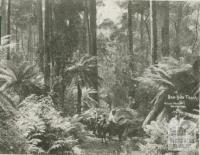