Beeac is a small rural town, 17 km north of Colac in western Victoria. It is on the eastern shore of Lake Beeac, one of several salt lakes in the Colac district. It is thought that the name was derived from an Aboriginal word meaning salt water, a reference to the lake.

The land east of the lake and around the town is mostly flat plains, and the land to the west is stony rises. Both, however, have soil from lava flows and are good for dairying and grazing. Potatoes and onions were also grown on the fertile plain.

Bailliere's Victorian gazetteer (1865) described Beeac as a recently surveyed town (1864) with one hotel, the Ondit. Some of the soil was 'the finest for agricultural purposes to be found in the colony'. A salt factory was established by 1880.

When a school was opened in a Methodist chapel in 1862, the place was known as Ondit. Although better known as Beeac by 1865, it was 1872 before the name of the post office was changed from Ondit. In 1889 Beeac was connected to Colac by railway. At about the turn of the century Beeac had over 250 people, and it was described in the Australian handbook in 1903:

Beeac is one of several towns or villages in the fertile area north of Colac, and in contrast to some of them maintained a relatively steady population. The establishment of a hospital - later a community health centre - was a significant factor, and its position on the railway line from Colac to the Ballarat district probably also helped. (The line from Colac to Beeac was opened in 1889 and the rest of the line to the Ballarat area opened in 1910-11. The whole line was closed in 1953.) The Colac Dairying Co opened a creamery in 1915 which continued until 1974 when road-transport bulk-milk collection took over.

Beeac has a general store, a community centre, the health centre, a golf course, a sports oval, a Uniting church (1862) and a school (28 pupils, 2014. The Catholic church was closed in 2009. Beeac's avenue of honour, planted in 1917, is substantially intact. Plans were approved in 2009 for a large single-shed broiler (chicken) farm in Beeac despite community protest.

Beeac's census populations have been: 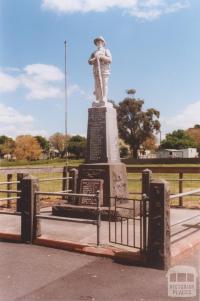