Beech Forest is a rural village in the Otway Ranges, western Victoria, 32 km south of Colac. It was named after the Myrtle beech (Nothafagus cunninghamii) found in rainforest habitats.

Beech Forest is situated on a ridge of the Otway Ranges, running from north-east to south-west. In the 1880s land was put aside for farm selections in the vicinity of Beech Forest, with the prospect of transport by railway for marketing of produce. The railway, a narrow gauge one, did not come until 1902.

Many selectors were unsuccessful, but one of them, John Gardner, also opened a hotel and butchery at his Ditchley Park estate about 1 km north-west of Beech Forest. Gardner and the Colac Shire agitated for the promised railway. By the time of its construction much of the cleared selections had lost valuable trees and become covered with wattle scrub, bracken and blackberries. The railway, however, stimulated timber harvesting, and several forest mills were connected by tramway to the Beech Forest railway station.

The railway also helped the small dairy farm activity, and the Beech Forest butter factory operated from 1902 until 1924. Cattle, sheep and pigs were introduced, and a bacon factory was opened in 1907. Potatoes and other vegetables were grown.

There had been a school intermittently functioning since 1895 in Gardner’s hotel and in 1909 a new building was provided. A Catholic church was opened in 1906 and Presbyterian and Methodist churches were opened in 1903 and 1908. Sporting clubs were established during the same decade, using a racecourse that had been formed by Gardner in 1887.

On 6 May 1919, the Otway Shire was formed, by severance mostly from Colac Shire. A shire hall and offices were opened in Beech Forest. Timber and agricultural produce, mainly the former, kept the ‘Beechy’ train running until 1962 but a combination of hard wear on locomotives by curves and grades, and improvement of roads, sealed the railway’s fate. The school was closed in 1981 after the opening of a consolidated school at Lavers Hill. After local government amalgamations in 1994 the shire hall was kept and the recently built shire office was sold.

Beech Forest is on a scenic tour route as the improved road has attracted motorists to the Otway waterfalls, fern gullies and forests. The large Aire Valley pine plantation is to the south and east. Beech Forest has a hotel, an Anglican church, and a recreation reserve. The Anglican church is the sole remaining place of worship. Constructed in 1910, it replaced the one opened in 1903 which burnt down.

Beech Forest’s census populations have been: 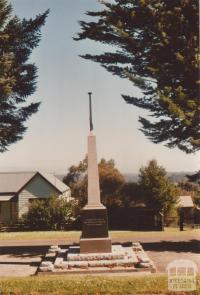