Berriwillock is a rural village on the Calder Highway and a railway line to the Mallee region of north-west Victoria. It is between Wycheproof and Sea Lake, 20 km south-east of the latter.

The name is thought to have derived from Aboriginal words meaning a shrub or fruit and a galah.

Settlement in the Berriwillock district began in 1890, comprising a few farm selections and a wine shanty. In 1893 extension of the railway line from Wycheproof was surveyed and two years later it was opened. A mechanics’ institute was built in 1894 and was the venue for the first school (1895). The completion of the railway brought more farm selectors, a hotel (1896), Anglican, Catholic, Methodist and Presbyterian church services and several sport and recreation clubs.

The augmentation of local water supplies came from Lake Buloke (began 1902), the Grampians water storages and the extension of the Western Waranga Channel (1920s). Farmers could thus run sizeable flocks or herds as well as planting cereals. Between 1901 and 1911 Berriwillock’s population increased more than fourfold to 391 people. Permanent church buildings were erected during 1906-08, and dams for town water supply were excavated in 1912 and 1928.

Wheat was Berriwillock’s staple, transported from the railway siding. Bulk handling began with the construction of a silo in 1943, enlarged fivefold to 1 million bushels in 1963. Prosperity was probably near a peak in the 1960s, and the school had nearly 100 pupils. It closed in 1993 when the enrolment was 21. Wheat production soared, and a storage shed was built bringing total capacity to 1.75 million bushels. Grain quotas came in the 1970s, along with diversification into meat production and piggeries.

Berriwillock has about eight shops and businesses, including a general store, hotel, and a motor garage, golf, bowling and tennis clubs, two churches and a public hall. Its census populations have been:

Winifred M. Nixon, While the Mallee roots blaze: the story of Berriwillock, Back to Berriwillock Committee, 1965 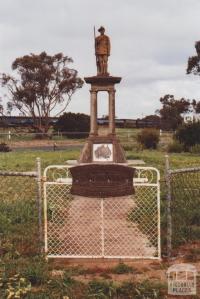