Berringa is a former mining town 28 km south-west of Ballarat. Gold was discovered there at Kangaroo Gully in 1860, and the settlement was first known as Kangaroo, later as Moonlight, and finally as Berringa (1881). It is thought that the name was derived from an Aboriginal word meaning rainbow or sunset.

A Methodist church was opened in the 1860s and a school was opened in 1867. The mining activity resulted in little more than a village until a new find in 1897 stimulated rapid growth. By about 1904 there were numerous shops, butchers, dressmakers, bootmakers, five boarding houses, a coffee palace, a Catholic church and school, a public hall and a local newspaper (1903-20). Cricket, football, tennis and racing clubs were formed in 1902.

In 1903 Berringa was described in the Australian handbook:

Mining had nearly 20 good years before shops and houses began to be transported out of Berringa to more prosperous places. Within five years the population fell by about 80%. A railway from the Ballarat area to Colac, via Berringa, ran during 1911-53.

In 1937 a new syndicate revived mining, until it ended in 1954. The school was closed in that year and acquired as a public hall. The sense of community was further maintained in 1957-58 when the cricket team was the local premier.

Berringa has a scattering of buildings, and the largest of the mines is about one km northwards at the edge of the Enfield State Forest. Berringa’s census populations have been: 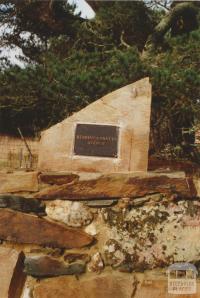