Boinka is a rural locality on the Ouyen Highway and railway line from Ouyen to Pinnaroo, South Australia. It is situated in the Mallee region, north-west Victoria, in a band of settled country flanked on the north and south by the Murray-Sunset and Big Desert National Parks. Boinka is 70 km west of Ouyen. It is thought that the name is derived from an Aboriginal word describing a beetle.

When it was found that the country west of Ouyen was potentially as good as that farmed at Pinnaroo, and test bores revealed the availability of acceptable water, settlement was planned. The State Rivers and Water Supply Commission (1905) constructed catchment tanks during 1910-11, coinciding with the Boinka district being opened for farm selection. The railway line was opened in 1912, and business began in the Boinka village – grocer’s shop, blacksmith, boarding house and coffee palace. A public hall was built in 1913, and used for a school until a school building was erected. Outlying schools were opened at Boinka West (1917-21) and Boinka North (1926-40).

The land included sandy loams and was used mainly for wheat growing. Camel transport was sometimes used to carry wheat to the railway siding. The peak population was reached in the early 1920s, declining to about one quarter in 40 years.

In 1979 the school was closed, and the building kept for community use.

Boinka’s census populations have been: 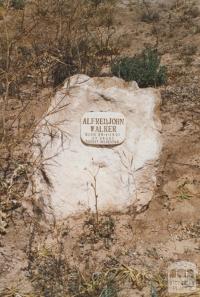