Branxholme, a small rural township in western Victoria, is on the Henty Highway, 23 km south-west of Hamilton.

The first white settlement in the area was in the form of pastoral runs occupied in about 1842. By then there was a rudimentary track from Portland to the area known as The Grange (later Hamilton) which had been settled in 1836. At the place where the track crossed the Arandoovong Creek a hotel ‘Travellers’ Rest’ was opened in 1843.

In 1844 the hotel was acquired by Thomas Best, and the place was known as Arandoovong or Tommy Best’s Ford. In 1852 a town was surveyed and named Branxholme, probably after Branxholme Castle in Roxburghshire, Scotland, the principal scene of one of Sir Water Scott’s novels.

An Anglican school was opened in 1856, but Presbyterians became the most numerous congregation, building Branxholme’s first church in 1862. Later church buildings were Primitive Methodist (1876) and Free Presbyterian (1879) and, much later Anglican (1899) and Catholic (1941-73). The village also had a general store, post office and court house. In 1877 the Hamilton to Portland railway line, via Branxholme, was opened, and in 1884 the mechanics’ institute was opened. A branch line from Branxholme to Casterton was opened in 1884. With a population of over 250 people Branxholme was described in 1903 in the Australian handbook: 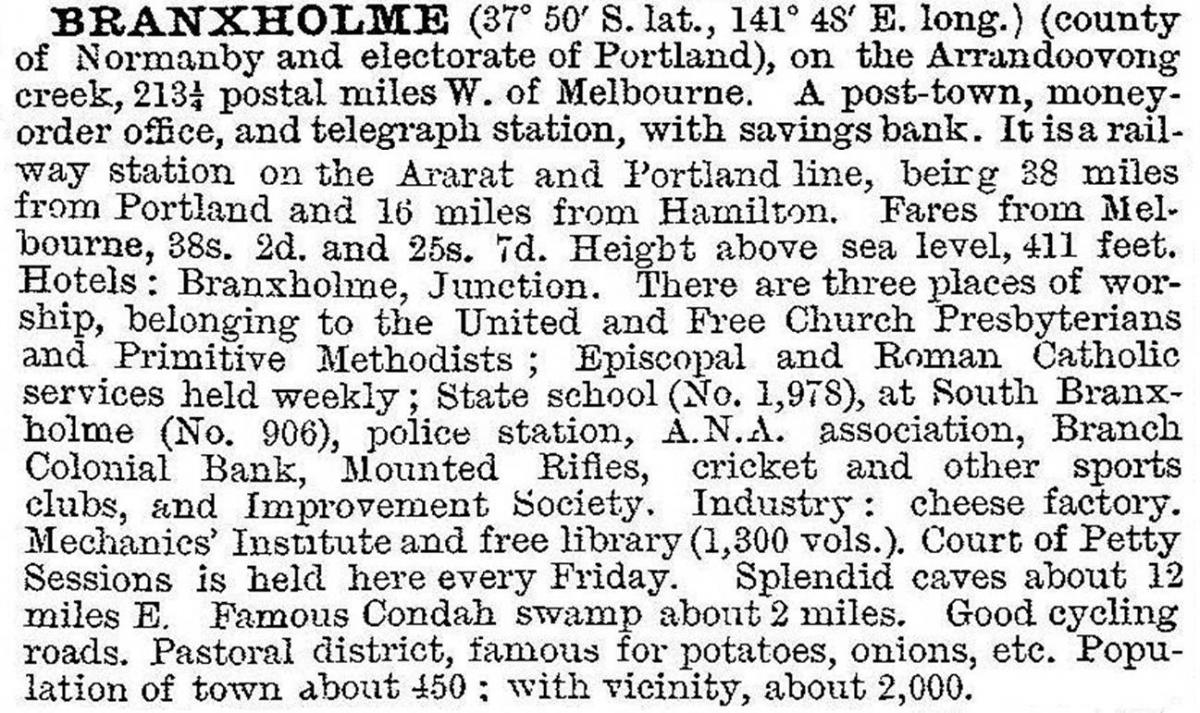 The country around Branxholme had several large pastoral properties, some of which came under the closer settlement schemes during 1910-20. Soldier settlement subdivisions came later. The main activity was sheep grazing, but there was some dairying until a short lived cheese factory (1896) was moved to the moister Condah Swamp area. (The swamp is fed by the Arandoovong Creek).

Branxholme has been one of the fortunate towns to keep its railway line, although the passengers’ rest room, cafe and several small shops and businesses of pre-war years have closed. Close proximity to Hamilton has detracted from the town’s viability.

Branxholme has a small school (combined with Wallacedale, 32 pupils 2014), a Uniting church, a public hall, a general store, a recreation reserve, a bowling green and a local reservoir. A kilometre north there is the Arandoovong homestead bed and breakfast.

Branxholme’s census populations have been: