Brunswick was an inner-urban municipality 6 km north of central Melbourne. It was bounded on the west and the east by the Moonee Ponds and Merri Creeks respectively. On its south it adjoined Melbourne city and Yarra city (east of Sydney Road). Its northern boundary was Moreland Road. The suburb of Brunswick is between Brunswick West and Brunswick East. Like the former municipality it runs from Park Street to Moreland Road. Its western and eastern boundaries are Pearson and Lygon streets.

Brunswick was subdivided into farm allotments which were sold in 1839. Most purchasers were speculators who looked forward to further subdivision. The allotments ran east and west from the main thoroughfare, Sydney Road. One of them was resold to Thomas Wilkinson and a partner. They named the property Brunswick Park, in honour either of the late Princess Caroline of Brunswick (late wife of King George IV), or in honour of the marriage of Queen Victoria to Prince Albert of the royal house of Brunswick. The streets each side of Wilkinson's property are Victoria and Albert. Wilkinson became Brunswick's first mayor.

Within ten years of Brunswick's farming activities the gold rushes caused a demand for building material. Bluestone was found mainly throughout the eastern half of Brunswick and clay west of Sydney Road. An early site of brick and pottery products was at the village of Phillipstown, just east of Grantham Street (1852). A school was opened there in 1853.

Sydney Road was the main route to several gold fields, and attracted commercial and civic development. In 1840 Wilkinson donated land in Sydney Road for Brunswick's first (Wesleyan) church, which provided the first school in 1849. The Presbyterians opened a primary school in 1855 and the Catholics in 1860. In 1875 the Presbyterians and the Wesleyans combined to open a larger school, which became the Albert Street or Central Brunswick School.

By 1856 an Anglican school was opened in Brunswick East. Schools and residential expansion came later to Brunswick West, along with Moonee Vale.

The clay deposits and Sydney Road were in close proximity to each other, and several hotels were opened in Sydney Road by the mid-1850s. The oldest remaining one is the Sarah Sands (1854, not 1846 as inscribed on the structure), at the southern end of Sydney Road. On 29 September 1857, Brunswick was proclaimed a municipality, becoming a borough later on. Council chambers were built near Albion Street, about one kilometre north of Brunswick's subsequent civic centre.

By the early 1850s the stone quarries were nearly worked out, but plenty of brick yards replaced them. In 1863, when Brunswick's brick makers had opened eight yards, the largest was opened near Pearson Street. It was named the Hoffman Patent Steam Brick and Tile Company, after the Hoffman steam brick kiln. Hoffman's later made pottery, ceasing in 1960 when its quarry became a tip.

In the late 1860s Brunswick's future civic centre became evident around the intersection of Sydney Road and Dawson Street when the mechanics' institute (1868) and St Ambrose's Roman Catholic Church (1869-71) were opened. The Anglican church of Christ had been there since 1857. A new town hall was opened in Dawson Street in 1876.

Since the mid-1860s Australian Rules football had been played in Brunswick, often among teams drawn from brick yards, and in 1879 the United Potteries Club became the Brunswick Football Club.

Apart from the brick yards there were numerous farms and large residences in Brunswick. The land boom in the 1880s resulted in many of the properties being subdivided and some of the mansions demolished. By the 1920s nearly all the subdivisions were completed. During the 1880s Brunswick's north-south spine was given two public transport routes: trains to Coburg in 1884, about two hundred metres west of Sydney Road, and trams in 1887, along Sydney Road to Moreland Road. The railway cheaply transported pottery products. Brunswick municipality's census population more than tripled in ten years to 21,000 in 1890. It was proclaimed a town on 13 April 1888.

As well as causing land subdivisions to fail, the 1890s Depression caused unemployment and exacerbated social divisions. Sydney Road was the venue for the Orange Day procession, and during the fourth annual procession in 1896 there was a confrontation with the Catholic community, many of whom were Irish. The St Ambrose church was by then a strong parish. Shortly after the recovery from the Depression the Australian handbook, 1903, described Brunswick: 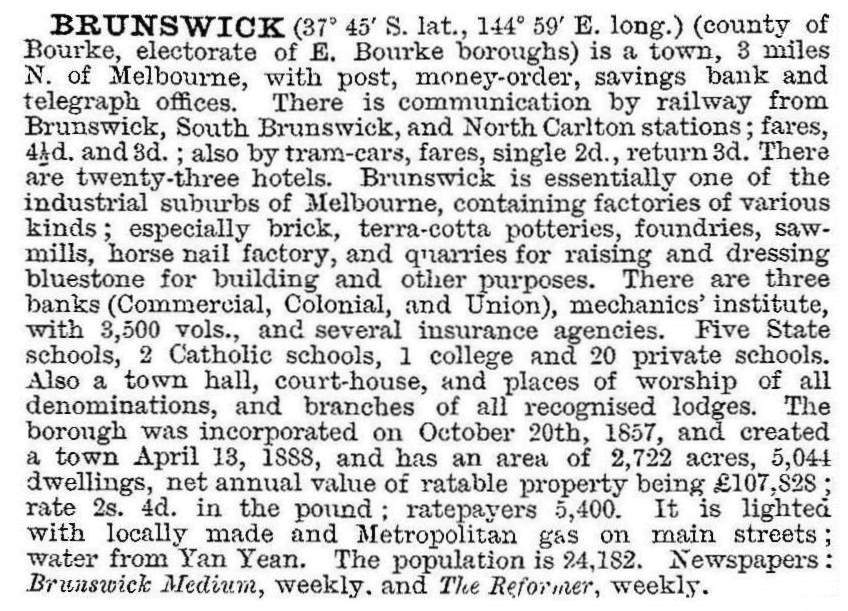 Until 1916 the Sydney Road spine was the only public transport corridor in Brunswick. Commercial, retailing and entertainment activity concentrated along Sydney Road for its entire length through Brunswick and northwards up into Coburg. It rivalled the mighty Smith Street, Collingwood, lacking only the large department stores. Brunswick became a city on 15 January 1908, whereupon civic progress moved beyond notions of reticulated utilities and road-making. The swimming pool was opened in 1914 and the first of several parks was formed over a former claypit. Residential settlement expanded northwards with the opening of a primary school and a railway station in 1924. (It had also spread to Brunswick East and expansion to Brunswick West was under way.)

In 1922 the first of Brunswick's many large clothing and footwear factories, Prestige Hosiery, opened. The growth continued through to the large Fletcher Jones factory in 1952.

Brunswick's association with left-wing politics was manifested in 1931 with the formation of a branch of the Communist Party and its participation in a campaign to stop legislation which would have outlawed free speech and the right of assembly. The occurrence of these events in Brunswick was linked to public agitation by unemployed workers during the Depression.

Secondary schools in Brunswick included the technical school (1916) and the girls' high school (1924). 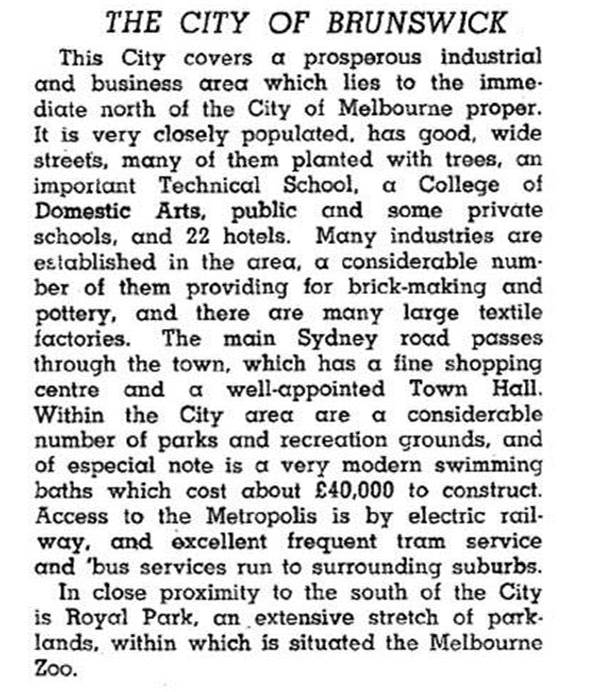 Postwar Brunswick had many European immigrants settle in its area. Since the 1880s, and again in the 1920s and 1930s, Italians settled in Brunswick, a well-known one being the father of Bartholomew (Bob) Santamaria, who became a prominent Catholic layman. Large numbers of Greeks settled there, mostly after the war, along with Yugoslavs and others. In 1976 the proportions of Brunswick residents of migrant background included Italian (15%), Greek (9.3%), Lebanese and Turkish (4%). Many found employment in textile and manufacturing industries. The Greek Orthodox Church was opened in 1969, in a former Methodist church.

The 1970s and 1980s, however, saw the collapse of protective tariffs, loss of local employment and gentrification of Brunswick. Between 1980 and 1995 three-quarters of Brunswick's factories closed. As a point of contrast, the Melbourne College of Textiles moved from Pascoe Vale to the former Millers Rope Works, Dawson Street, in 1992.

Gentrification has been equally visible. In 1986 the median house price in Brunswick was 86% of metropolitan Melbourne's. Ten years later it was 109%. The Sydney Road shopping area underwent a decline, particularly in 1982 when Coles Barkly Square drew patronage away from the southern end of the strip. The congested traffic conditions detract from Sydney Road's ambience, but the Sydney Road Development Committee (1991) worked hard to reverse the decline.

West of Sydney Road there are the Brunswick Football Ground, sports facilities, and parklands and ovals on former claypits (Hoffmans). The technical school has become a Special College, adjacent to the RMIT School of Design and Printing. Along the railway line to Coburg and Upfield the South Brunswick station was renamed Jewell (after Parliamentarian James Jewell), and North Brunswick renamed Anstey (after the prominent Commonwealth Parliamentarian, Frank Anstey). The Brunswick and Jewell stations (1888) are heritage listed.

Brunswick has many heritage listed buildings. The main ones are industrial and ecclesiastical, and include:

Heritage listed houses are fewer, and probably the most interesting are a row of iron cottages (c1854) in Brunswick Road. Bluestone, a feature of many Brunswick laneways, began to be removed as a cost cutting measure in 2012.

Brunswick's left-wing and multicultural history was manifested in the Brunswick council in the 1980s-90s. The council actively promoted the CERES community environment park (1981) in Brunswick East. The district was described locally, and only half jokingly, as the people's republic of Brunswick.

Brunswick became the first area in Victoria to be connected to the NBN (National Broadband Network) when it was trialled in 2011.

Two recent violent crimes shocked Brunswick residents. One was the murder of underworld figure Lewis Moran, gunned down at the Brunswick Club in Sydney Road in 2004. The other was the abduction, rape and murder of ABC employee Jill Meagher after walking along Sydney Road in 2012.

The census populations of the Brunswick municipality were:

On 22 June 1994, Brunswick city was united with Coburg city and part of Broadmeadows city to form Moreland city.

Brunswick suburb's census populations have been: 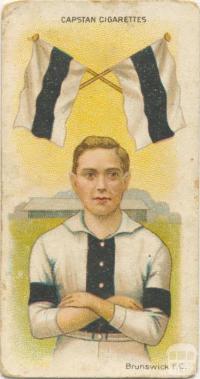 The Wunderlich Tileries at Brunswick, 1927 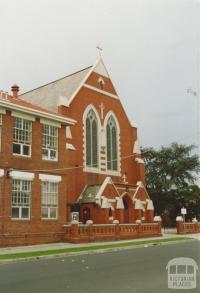 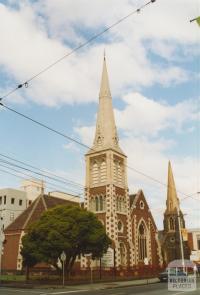